If Kovalchuk Must Be Traded: Thoughts for Don Waddell 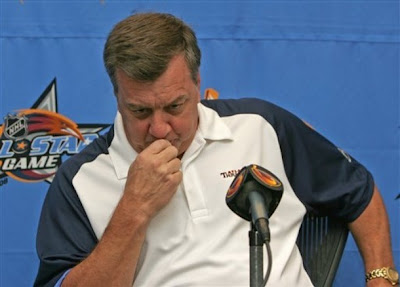 The closer we get to the NHL trade deadline, the more we hear about the many aspects of the impact a trade of one of the leagues impact stars, Ilya Kovalchuk.

Various outlets have speculated on, if he is traded: 1.) What teams would be interested/have the resources to do so? 2.) What the return to the Thrashers may involve. 3.) What will have to the already struggling franchise when their lone superstar is gone?

However, rather than try to breakdown all the unknown variables, let us take a look at a few parts to the equation.

Although Kovalchuk has expressed a desire to stay, and the Thrashers' Don Waddell will, no doubt, work feverishly to keep him, there is no way that Atlanta will pay him the "max salary" that his agent is reportedly seeking. Yet, I find it unlikely that any team will pay him what amount to Ovechkin-type money because, let's face it, as good as Kovalchuk is, he isn't Ovechkin.

Which leads us to this: If a deal cannot be reached with Atlanta, no team has ever received market value for a "rental player." Atlanta with their 29th ranked attendance, non-existent local television ratings and nose-diving merchandise sales, simple could not survive receiving less than market value.

We may be wrong, but it is believed that it would not violate the current CBA for Atlanta to allow teams to negotiate with Kovalchuk's agent regarding an extension prior to trading for him.  If a team could reach an agreement in principle with Kovachuk, he would no longer be a rental player and the Thrasher then could ask for full market value in return.

In this scenario, everyone wins including the Thrashers, as the organization could then look to their future centered around the impressive Evander Kane and the bounty collected in the Kovalchuk trade.
Posted by The Plumber at 1:59 PM