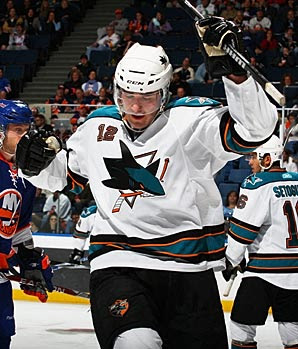 The previous week ranking may seem a little off because we missed a few weeks, but we are back on track! Clearly, the West is best!  San Jose rises to the top. Anaheim, Vancouver and the Isles move up, while the Flames, Bruins and Stars free fall.

1. (7) San Jose Sharks
The Sharks are running on all cylinders and revving their engine, blowing out opponents regularly.  San Jose has won four straight and have not allowed an opponent to score more than twice in a game for the last two weeks.

2. (4) Chicago Blackhawks
Winners in four of their last five, Chicago finds a way to win, even on an “off night.” This team has star and fire power galore.  Rumor has it that they may pursue Kovalchuk, which would heat up an already hot offensive attack.  Yet, the Hawks will go only as far as their goaltending will take them in the post season.

3. (2) Washington Capitals
Washington, now led by “Captain” Ovechkin, have won five in a row, and eight of their last nine and now control the Eastern Conference. Like the Sharks and Hawks, their offense is overpowering.  If their opponent is held to less than four goals…it’s a near automatic win for the Caps.

4. (10) Buffalo Sabres
The Sabres win with defense, but it hasn’t been there for them as of late.  Their recent lapses cost them the top spot in the East, but Buffalo still ranks with the elite.

5. (3) New Jersey Devils
The Devils’ scorers took some time off the past couple of weeks.  In between a pair of shutouts, they even made Martin Brodeur look (gasp) human with three straight defeats!

6. (8) Phoenix Coyotes
After some early struggles in January, Phoenix looks like they are back to form.  The Coyotes continue to thrive despite all the off ice drama that had surrounded the franchise.  Whenever the new ownership situation gets settled, they will have a fantastic on ice product to sell.

7. (11) Colorado Avalanche
The Avs also continue their surprising season.  Many had picked them to finish last in the West, but their rebuilding year has been an instantaneous success.  Colorado has won four in a row even with one of their leaders, Hejduk missing time.  No one is going to want to play this young, energetic crew in the playoffs.

8. (13) Vancouver Canucks
Now that both Sedins are healthy, the Canucks have been playing a revitalized game and it shows in the standings.  Maybe it’s the excitement surrounding the Olympics, maybe they are just finding out how good they can be, but Vancouver certainly looks the part of Canada’s best team.

9. (1) Pittsburgh Penguins
The Penguins ability to play well defensively has seemingly disappeared with the new year, and so has their top ranking.  Even if Crosby and now, Malkin continue to tear it up, the blueliners must figure it out in their own end.  Goaltender, Marc-Andre Fleury’s broken finger is not going to help the matter either.

10. (5) Nashville Predators
The Predators have a wealth of talent in net and on the blueline.  They have encountered a mini-slump recently and may be active in dealing some of their riches for some more consistent scoring.

11. (6) Los Angeles Kings
The Kings have been operating in a feast or famine mode since January rolled around.  Part of that centers around Kopitar failure to continue his Oveckin impression, but L.A. is still a dangerous team with a lot of weapons and could be very active at the trade deadline this season.

12. (14) Detroit Red Wings
Despite numerous injuries to key players, the Wings have found ways to stay in the thick of things.  The emergence of Jimmy Howard may signify the end for the on again, off again love affair the city has had with goaltender Chris Osgood.  Even when fully healthy Detroit may no longer be favorites in the West, but they sure could ruin a great regular season for the Sharks or Hawks awfully quick in a first round matchup.

13. (17) Ottawa Senators
After not being able to buy a goal and losing five straight, Ottawa has caught fire and has now won five in a row.  The Sens have been streakier than an Alex Kovalev goal scoring stick, but have been in the mix all season long.

14. (22) New York Islanders
Wonder boy goaltender DiPietro has sparkled in his return from injury.  The Isles now have a glut of talent in net.  Garth Snow’s evil plan seems to have worked. They are getting contributions from everyone.  They have won five of their last six, losing only to Pittsburgh in their current streak, which includes impressive wins over the likes of Detroit, New Jersey and Buffalo.

15. (9) Calgary Flames
As their captain goes, so go the Flames.  Iginla is mired in a goal scoring draught and Calgary has sunk like a stone.  Losers in six straight and in eight of their last nine, the Sutters have been searching through all of Jarome’s old sticks to find the one with all the goals in it.

16. (24) New York Rangers
The Rangers seemed to figure things out early in the new year, but recent inconsistencies have pushed the Blueshirts down a bit.  Sandwiched around a pair of high output offensive games against Montreal and Tampa, the Rangers scored exactly one goal over a four game stretch, which obviously resulted in three shutout losses. Queue the Lone Ranger theme, and let us see if Gaborik can ride to the rescue.

17. (28) Philadelphia Flyers
The Flyers have to love 2010.  Someone must have told them that they actually are a good team, because they sure have played like it again.  Ray Emery is back, and so is their confidence.  Winners in six of eight, Laviolette and Co. hope to keep things rolling.

18. (27) Anaheim Ducks
Who turned the lights on in Anaheim? After a horrid start, and despite recent injuries to Finnish stars Koivu and Selanne, the Duck have put on a show in January.  Winners in seven of their last nine games, Anaheim has made significant progress in capturing a playoff bid.

19. (12) Boston Bruins
The Bruins won a dramatic contest in the season’s Winter Classic, but it has been all downhill since for Boston.  The team has won just three games this month including the aforementioned made for TV special. The B’s offense has let them down again.  Injuries and the ghost of Phil Kessel loom large.

20. (15) Minnesota Wild
If Minnesota could just clone Guillaume Latendresse they would rarely lose.  However, after a four game win streak, the Wild have suffered through a losing streak to match. After heating up, teams in the West seem to dial it up a notch when playing the boys in the Christmas outfits.

21. (16) Atlanta Thrashers
The Thrashers were mired in a serious slump to close out December, but have been playing win one; lose one for most of January.  The fate of the franchise’s lone superstar seems to overshadow anything that the team does on the ice.  Will he stay or will he go? Everyone wants to know.

22. (21) St. Louis Blues
The Blues have been streaky and don’t seem to have the magic of last year’s squad.  Paul Kariya has re-emerged and has become the subject of trade talk once again, but what will he fetch in return?

23. (19) Florida Panthers
Vokoun has continued his masterful season, but the Panther’s pop gun offense has let him down far too often this season.  They show signs of breaking out now and then, but seem to fall short when it seems they could make an extended run.

24. (26) Montreal Canadiens
Montreal has won only two games in the month of January, but lucky for them a few other teams have been even worse. This is not the season Bob Gainey had hoped for.

25. (18) Dallas Stars
The Stars have played abysmally in the defensive zone and have nearly dropped off the map in the West.  The team looks like they have had it with Marty Turco and will probably look to move him at the deadline.

26. (29) Tampa Bay Lightning
No longer mired in a long losing streak Tampa seems to get excited to play the elite teams, beating New Jersey, Pittsburgh and Washington this month, but then they fall asleep again when non-marquee clubs roll in and blow them out.

27. (25) Columbus Blue Jackets
Columbus had a modest win streak give theirs a little hope, but their leaky D just is too much for Rick Nash and friends to overcome on a nightly basis.

28. (23) Toronto Maple Leafs
The Leafs fooled us all, making many think that they finally put it all together.  January has exposed them once again for the up and down bunch that they are.

29. (30) Carolina Hurricanes
The Canes named Eric Staal captain and his offensive game has resurfaced.  After a nightmarish first half, Carolina has begun their climb which will eventually lead them out of the basement.

30. (20) Edmonton Oilers
Edmonton’s fire sale will begin after the Olympic break.  Some untimely injuries have sucked the life out of this club and right now, the Oilers flat out stink.
Posted by The Plumber at 6:05 PM