Malkin, Not Jagr, Back on Track? 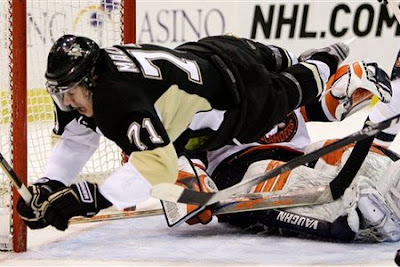 A little more than a week ago, Pittsburgh Post-Gazette writer Ron Cook, stirred up a little controversy when he suggested that Malkin's slump and corresponding self-blame and body language earned Malkin more than a bit of criticism and a comparison to the last days of Jaromir Jagr's tenure in Pittsburgh.

After scoring a hat trick against the Islanders, and notching his fourth goal in two games, it seems Mr. Cook, that Evgeni Malkin's "sulking" is over.  Even though Cook suggested that Malkin could learn a thing or two from Sidney Crosby regarding dealing with adversity. it was Crosby, who figured in on all six Penguins' goals last night that was talking about Malkins' abilities after the game.


"Those two goals are great examples of his shot," Crosby said of Malkin. "He was ready to let it go. Those are tough for goalies to stop when he sets up like that. When he got his chances to let it rip, he buried it." - nhl.com


When asked about his own performance, Malkin spoke about his team:


"But I'm not thinking about my goals," Malkin said. "I'm just want to play my game and help my linemates." 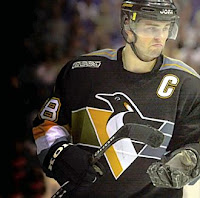 Yes Malkin was in a slump and yes, he probably took it too hard, but he is far from Jagr-esque in his demeanor and attitude.  His head is in the right place. Although it is not yet clear that Malkin has indeed returned to form, what is clear is that Malkin places more pressure on himself than anyone else could.

It's easy to assume that a player is sulking by attempting to interpret body language and read the "signs" of frustration during games, particularly when that player cannot yet fully convey their thoughts due to a still remaining language barrier.  Yet, we all know what happens when one assumes...
Posted by The Plumber at 3:04 PM