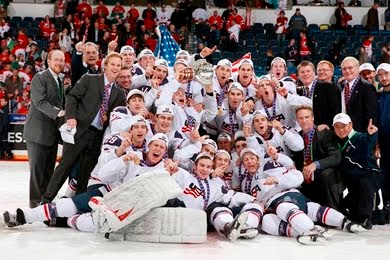 The U.S. won a New Years Day battle with Canada at the World Junior Hockey Championship.


Years ago after a U.S. team was humbled by a lesser light at the World Junior Championships, the late American hockey legend Bob Johnson said to me, frustration dripping from his voice, "You would think that in a country of 280 million people we could find one kid who could play some goal for us."


When Washington Capitals prospect John Carlson scored the overtime game-winner to beat Canada 6-5 to win the gold medal Tuesday in Saskatoon I thought about how much Badger Bob would have loved watching this American team perform...

Johnson always believed that America could be a hockey country, with the ability to develop players who would arrive at international tournaments with the same swagger and confidence that Canadian players have always displayed.


The 2010 Olympic Games are in Vancouver, but will the US' WJHC gold medal increase the swagger of the US Olympic team?

Nevertheless, don't expect too much from this youthful American Olympic team.  There is talent, grit and depth such that has rarely been seen in prior Olympic squads, but the US is up against some extremely talented competition in 2010.

USA Hockey fans, congratulate the Junior team and cheer on your Olympians, but temper your hopes for Miracle on Ice II this Olympiad.
Posted by The Plumber at 2:15 PM