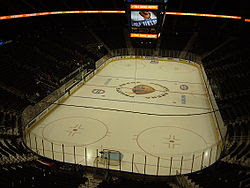 The Atlanta Thrashers will be no more.  The franchise will be sold to the True North group and moved north to become the Winnipeg Jets, or the Manitoba Whatevers.  It's only a matter of days now before the official announcement.

Yet, before all is said and done, Ken Campbell of the Hockey News delivered an interesting twist today when he told us that NHL Commissioner Gary Bettman wants to make the Atlanta Spirit Group pay as steep a price as possible for the transaction.

Contrary to a published report, a deal to move the Atlanta Thrashers to Winnipeg was not completely done as of late Thursday night, but it had nothing to do with negotiations between the Atlanta Spirit ownership group and True North in Winnipeg.

According to a highly placed source with knowledge of the inner workings of NHL ownership, all sides can accurately say that a deal is not complete, despite the fact that all signs appear to the Atlanta Spirit LLC and True North reaching an agreement in principle to sell the team for $170 million.

What still has to be determined, according to a source, is how much of that purchase price goes to the Atlanta Spirit, a group that is hardly dealing from a position of strength when it comes to selling the team. It has been widely reported that the purchase price of the team is $110 million, with an additional $60 million going to the NHL in the form of a relocation fee.

The NHL returned to Atlanta in 1999 because they believed in the viability of the market. After a successful start in the city, the Atlanta Spirit Group (ASG) purchased the team in 2003.  As we have talked about in this space before, the group rode the wave of success for a few years, before their own apathy began to dismantle the operation.

Sizing up Atlanta's market potential, we offer a snap shot of the city's population numbers:

What do these number mean?  To fill Philips Arena to capacity, the team needed to draw roughly four percent of the locals to the building on a given night.  Note that the four percent we speak of, are people who were within walking distance of the area from their home!

If you include the metro area (potential fans that would have to take public transport or drive to the arena) the team required less than one-half of one percent (That's .05%!) of the population to make their way to a given game.

Still, ASG managed attendance numbers near or at the bottom of the league on an annual basis.  As an additional bonus, Atlanta also ranked at or near the bottom in local television ratings and merchandising.

With a massive media market, a new, sponsored arena, which ASG controlled, and a well suited population distribution, even a poor marketing and PR effort could keep a professional sports franchise viable.  Yet, this group found a way to lose millions of dollars in an ideal situation.

Not only does ASG's incompetence place a dark mark on the NHL's Board of Governors for being forced to relocate franchises from the city twice, but it creates a source of embarrassment for the city, and the thousands of fine folks who did faithfully invested in supporting the hockey franchise there.

Bettman absolutely should put the screws to the Spirit Group.

It should be noted that the relocation fee for the Thrashers seems to have come out of nowhere. There was no relocation fee when the Minnesota North Stars moved to Dallas in 1993, when the Quebec Nordiques moved to Colorado in 1995, when the Winnipeg Jets moved to Phoenix in 1996 and when the Hartford Whalers relocated to Raleigh, N.C., in 1997.

And the NHL is completely in the driver’s seat on this one... In reality, Levenson is faced with the prospect of taking what the NHL lets the Atlanta Spirit have or absorbing crushing losses for at least one more season.


Bettman is using his leverage in this situation to his full advantage, as he usually does. And anyone who thinks Bettman does not have the full backing of all the league’s owners is likely ignoring the fact that he has handled the Phoenix and Atlanta situations brilliantly. 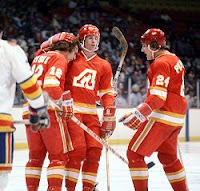 No doubt, Bettman will hear undue criticism  and blame for "another non-traditional hockey market failure."  Yet, if their is any blame to be directed at the league it should be for not interfering with the ASG ownership before the situation became so dire.

Hockey certainly could have succeeded in Atlanta, but we all just watched it fail before anything was done to correct the problem.

Levenson and the LLC should have to take it on the chin for their mishandling of a perfectly viable situation.
Posted by The Plumber at 5:08 PM