2011 NHL Playoffs: Round One Heroes and Zeros 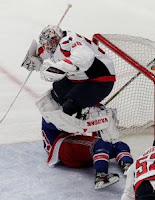 Hero: Michal Neuvirth
The Caps came into these playoffs with too many questions in net.  Who will start?  How will they handle the extra pressure?  Well, Neuvirth answered all questions with a stellar 1.36 GAA, .946 save percentage, a shutout and a pair of OT wins.

Neuvirth's gaudy stat line is testament to the team's overall dedication to defensive play, but make no mistake, he played exceptionally well throughout.  There will be no questions heading into Round Two.

Honorable mention to The Gr8 Ovi.


Zero: Derek Stepan
It's tough to blame any one individual on the Rangers in the series.  They played well overall, and kept things close in nearly every game they lost.

However, Stepan was a team worst minus-5, and was on the ice too many times when the Caps scored big goals. He failed to score a single point in the five games, despite averaging more than twenty minutes of ice time per game.  Even worse, he managed to only fire of four, that's right, four shots during the entire first round.  Not impressive.

This was an easy choice.  Briere was exceptional.  He seemed to be everywhere. When the Flyers needed him to come through, he did.

Briere tied Teemu Selanne for the most goals in the First Round with six, including two power play pots and a game winner. He registered a whopping 30 shots on goal, constantly applying pressure to his former teammate, Ryan Miller.

Zero: Ryan Miller
Despite the fact that he was the reason the Sabres took the series to seven games, Miller folded in crunch time.

When things got emotional, Miller seemed to let the distractions get to him.  Mike Richards "murder" comments and Daniel Carcillo's one ice antics appeared to be too high on his priority list, as the Sabres surrendered ten goals to Philadelphia in the final two games.  Miller's play is not the reason Buffalo lost, but he needed to be better in the clutch.

Hero: Nathan Horton
Horton was not dazzling, didn't put up huge numbers or really do anything that really stood out... that is if you don't count his two game winning goals, including an OT series clincher in Game Seven of the series.

Both Boston and Montreal had huge contributors, and there are plenty of players that deserve to mentioned here, but we give the nod to Horton as he made the difference in two games of an extremely tight battle between old rivals.

Zero: Boston's Power Play
With as well as nearly everyone on both sides played in this series, there is no way we are naming a culprit here.

The Bruins were oh-fer the series with the man advantage.  Boston scored zero goals on twenty-one opportunities, and, get this... they gave up one shorthanded goal.  So, technically, they were a negative-one for the series on the power play.  That's pathetic.

Hero: Martin St. Louis
Every time St. Louis was on the ice, he was a threat to score.  No matter what game you look at, he was always the most dangerous man with or without the puck.

St. Louis was downright deadly on the power play and was continually double shifted to create matchup problems for Pittsburgh's defenders.  He led all Tampa forwards in ice time.  He led all Lightning scorers, and made the difference in this series.

Zero: Alexei Kovalev
Yes he scored the game winner in Game One, but he disappeared after that.  He was no help on the man advantage, turning the puck over trying to stick handle into the zone, and had more giveaways than any other Penguins forward.


Additionally, Kovy had a team worst plus/minus, the least amount of shot blocks (one) and hits (three) of any Pittsburgh forward, while placing the team shorthanded five times.  Not impressive.

We know you just thought and/or said that.

However, we also recognize the incredible mental toughness he displayed by taking it all in stride and, more importantly, played fantastically during an OT thriller in Game Seven.

It's how you finish that's most important.  Stick tap to Luongo's mental game.

Zero: Troy Brouwer
This was another series where we had to split hairs to pick a goat.  Brouwer is a legit twenty goal man in the regular season, but doesn't bring the same effectiveness in the playoffs.


In his defense, Brouwer did lead the team in hits, but was held completely scoreless in a seven game series, managing to total more penalty minutes than shots on goal. Against his hometown Canucks, Chicago needed him to make an impact on the score sheet and he came up empty.

Hero: Douglas Murray
With all eyes on San Jose's top scorers and goaltending, Murray steadily set the defensive tone for the team.  He led the Sharks in hits and penalty kill time, was second in blocked shots and took only one minor penalty in the six game series.

He had only one point, but Murray managed to do what he does, which is throw big hits, frustrate opponents and kill penalties, without spending much time spent in the sin bin.

Zero: Dustin Penner
With Anze Kopitar sidelined, the Kings needed someone to step up to help fill in, at least a bit more, offensively.  Penner was one of the many options Los Angeles had hoped could come through, but it just never happened.

Penner did manage a goal in Game Five, on his only shot of the game.  He was held without a single shot in another contest, and manged only ten shots on goal in the six games.  Despite his huge frame, Penner didn't use it.  His eleven hits and three blocked shots underscore his minus-3 and six giveaways in the series.  The Kings needed him and Penner was nowhere to be found. 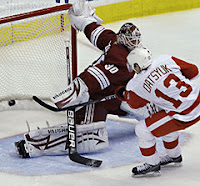 
Hero: Pavel Datsyuk
It was a short series, primarily due to the efforts of Datsyuk.  He put on a show in both ends of the ice.  In just four games, Datsyuk led or was tied for the team lead in goals, assists, points, plus/minus, even strength points, power play points, takeaways, faceoffs won, shots on goal and led all Detroit forwards in blocked shots and ice time.

In short the Sverdlovsk, Russia native was his usual quietly dominating self.  Hockey's human highlight reel turned Phoenix defenders inside out time and again to help Detroit put the Coyotes out of their misery in the First Round's only series sweep.

Zero: Ilya Bryzgalov
Bryzgalov had another stellar regular season for the Coyotes. When the playoffs started, his brilliance ended.  Bryzgalov surrendered seventeen goals in the four games, finishing with an awful 4.36 GAA, and a downright abysmal .879 save percentage.

With talk surrounding the team's future in Phoenix, the Coyotes goaltender seemed if he were already focused on the off-season too early and even appeared disinterested in an appalling performance in the clinching Game Four on home ice.


Hero: Shea Weber
In one of the most entertaining series,Weber was a standout.  The hulking blueliner left an imprint everywhere. He tied for the team lead in goals, led the team in plus/minus, power play goals and blocked shots.  Weber made crucial hits and intimidated with his booming shot.

If he doesn't win the Norris Trophy for his regular season efforts, he certainly earned top defenseman honors for Round One.  A number of players really performed in this series on both sides, but Weber stood taller than anyone.


Zero: Jarkko Ruutu
Normally we would not place blame on a third or fourth liner like Ruutu, but he failed to live up to expectations.  Ruutu is usually at his best in the post-season playing his role of agitator and frustrating opponents with not only his yapper, but with excellent two way pressure.

What did the Ducks get out of him?  A cheap shot on Martin Erat, which earned Ruutu an one game suspension and little else.  The infuriating Fin only ended up playing in three games, scored no points, managed only a single hit, one blocked shot and an unimpressive minus-1 with one minor penalty and a game misconduct.

Anaheim could have used some smart play from Ruutu to turn the tide in their favor.  They got none of that in a testy, tightly contested six games.

Dishonorable mention to Ruutu again.
Posted by The Plumber at 10:35 AM