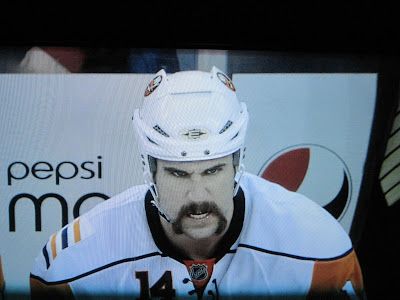 Fresh off a nine-game suspension for a concussion-inducing elbow to the head, and special helping of punches and taunting of an ice prone Eric Tangradi, Trevor Gillies returned to the ice last night.

His return was short lived.

After the game Gillies explained:


"I went over and finished my hit. There was no intent at all to injure him," Gillies said after the game. " I saw him hit [DiBenedetto] and I just made a hit on him. That's it."

Both Gillies and coach Jack Capuano said they didn't think Clutterbuck's back was fully turned. "I didn't think it was from behind at all," Gillies said.. " I hit him from the side."

Clearly neither Gillies, nor his enabling coach seemed to care to mention that Gillies forearm to Clutterbuck's head preceded the "hit."

It was nearly a carbon copy of the shot that concussed Eric Tangradi ten games ago.

Trevor Gillies is not an inexperienced player, who has gotten a little reckless trying to make an impression on the coaching staff.  He is a 32-year old veteran of professional hockey since 1999.

All kidding aside about the not being hugged enough... His refusal to take responsibility, and blatant disregard for the swell being of others under the guise of defending teammates are signs of psychological issues.

It was interesting to read that (paraphrasing) frustration and goal differential had little to no correlation to acts of aggression on the ice.

This would support the notion that Gillies' violent acts are not "in the heat of the moment" or reactionary, but are displays put on by a person with no respect for the rules of the game, nor any understanding of sportsmanship, not to mention a complete disregard for the safety of opposing players.

Mario Lemieux verbally asserted that the NHL's punishment of Gillies in February was not enough. Gillies supported Lemieux's statement with his actions last night.

After the Pittsburgh incident:

"The actions by the Islanders' Gillies and Martin were deliberate attempts to injure by delivering blows to the head of players who were unsuspecting and unable to defend themselves," league disciplinarian Colin Campbell said in a statement. "The message should be clear to all players: targeting the head of an opponent by whatever means will be dealt with by suspension."

Campbell was right, the message SHOULD BE clear to all players, but it wasn't to the Isle's supposed "tough guy" Gillies.

When Vancouver's Rick Rypien lost it a few months ago, attacking fans in the stands, he voluntarily sought out anger management counseling.


Gillies should face some involuntary counseling in addition to any suspension he now faces.
Posted by The Plumber at 6:16 PM