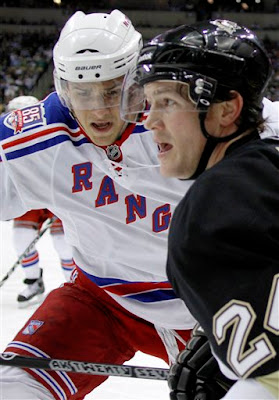 Ol' Matty Cooke did it again.

Straight off a page from the Jimmy Superfly Snuka handbook, Cooke delivered a flying elbow to the head of New York Rangers defenseman Ryan McDonagh.


Cooke dished out another dangerous blow to an opponent, and received a a five-minute major penalty and game misconduct for his efforts.  The Penguins received a four-goal, third period explosion by the Rangers and a big, fat L for the night.

A day later, after an in-person hearing with NHL disciplinarian Colin Campbell, Cooke was handed a suspension covering the remainder of the regular season and the first-round of the playoffs.  Meaning his "time out" could span anywhere from fourteen to seventeen games.


Within hours of the incident, and stretching on days afterward, reactions by television analysts, bloggers and fan message boards have blown up every possible medium of media.

Lost among all the fury over Matt Cooke's history, Mario Lemieux's responsibility, and the NHL's disciplinary action is the sheer graciousness of Ryan McDonagh.


Reiterating his same comments after the incident, McDonagh expounded further after Cooke's suspension was announced:


"I don't think he's trying to put his team down (with a) five minute penalty...

"It's coming down to the end of the year here. Ten games left for about everybody. You're trying to get good momentum going into the playoffs or keep your playoff spot and that was a close game at the time and momentum could go the other way.

I think he's trying to make a big hit and he just caught me wrong. I don't think it was his intent.

The suspension … it is what it is. The league is really pushing to get these hits out of the game. If that's a statement, it's a pretty big statement, for sure."

"The consensus in hockey circles is that Matt Cooke's hit Sunday to the head of New York's Ryan McDonagh was indefensible."

However, McDonagh, although he had every right to condemn him, found a way to defend the indefensible.

Pittsburgh Penguins GM Ray Shero and coach Dan Bylsma applauded the suspension, and were encouraged by Cooke's apology and commitment to change the way he plays.

Time will tell if Matt Cooke really has made an adjustment for the good of the game and the safety of it's players; but we do know one thing now...

Ryan McDonagh is not just a young player who has an appropriate respect for veteran players.  He is a player who is willing to go the extra mile to give the benefit of the doubt when absolutely no one else would.

As the recipient of disrespect on the ice, McDonagh deserves recognition for his magnanimous gesture off of it.