Re-Signing Brent Seabrook: The Chicago Blackhawks Open Their Wallet One Too Many Times 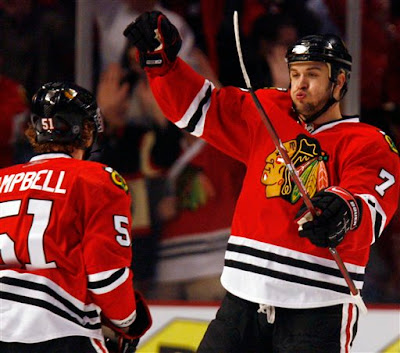 During the summer of 2009, Dale Tallon was let go as the GM of the Chicago Blackhawks.  The firing was a shock to many in the hockey community, as Tallon had been a big part of pulling the team out from the ashes and molding them into a contender.

After reaching the Conference Final just a few months before, we were all left guessing at a reason the Hawks decided to dump him for Stan Bowman.  Other than the generic dismissal note by the team, most observers speculated that the main complaint was Tallon's recent run of overpayment for free agents like Brian Campbell and Cristobal Huet the summer before.


The Blackhawks won the Cup in the first year under Bowman's guidance, but they paid a steep price for all the talent that got them there; and were forced to sell off many assets.

With the way that Chicago has struggled to stay in it in the ultra-competitive Western Conference, one might think that all the necessary roster shuffling and salary dumping/hiding, the Blackhawks may take a more conservative approach to building a long-term winner.

That idea of conservatism  had to go out the window when the team announced the signing of Brent Seabrook to a very sizable five-year $29 million extension on Sunday.

Please don't get us wrong, we believe Brent Seabrook to be an excellent defenseman.

He just is not a guy that a team like Chicago can pay more than Duncan Keith, particularly when you consider that Campbell's albatross contract and last off-season's re-signing of Hjalmarsson, the team has more than $20 million invested in their top four blueliners until 2014.

Where does that leave the Blackhawks forwards situation for next year and beyond, as the team has only six of them under contract beyond this season?

They also will need to sign two goaltenders.  Someone has to play between the pipes, right?

Standout Corey Crawford will be a RFA after the season, but he likely will want more than the $800k he has earned this year.  How much more, will be the real question.  Remember Bowman didn't believe Niemi was all that valuable, even after winning the Cup.  It's quite clear that they won't be paying a ransom for any backstop next season.  They can't.

Absolutely the organization has protected it's core, but possibly at a disproportionate cost.  Teams that compete for the Cup every season know that depth is just as important down the stretch as your best talent.

Seabrook no doubt is an important piece, but his salary may do more damage to the Blackhawks' Cup chances than his talent will to help them.
Posted by The Plumber at 12:13 PM