Penguins Show the NHL Who Has the Biggest Johnson 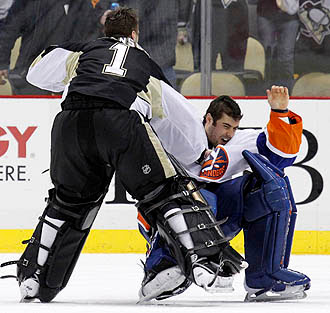 The league has many Johnsons dispersed about the 30 NHL teams.  All-time, there have been twenty-four players in league history with "Johnson" stiched on the back of their sweater.

The Pittsburgh Penguins alone, have had six players by the name of Johnson, in addition to Stanley Cup winning, and legendary head coach Badger Bob.  There have even been two father/son Johnson combos with the team.  The aforementioned Badger Bob and his son Mark, member of the Miracle on Ice US Olympic team; and Bob and Brent, both goaltenders for the Pens.

However, it wasn't until last week, that we, along with Isles goaltender Rick DiPietro, were put on notice that current Pittsburgh backup goaltender, Brent Johnson is the biggest, baddest Johnson of them all.

Reminiscent of "One-punch wonder, Iron Mickey" O'Neil, Johnson took down DiPietro, with just that: one punch.

We realize that it has made the rounds of the internet, but we don't believe that it has received enough attention.

Realize that Johnson not only put his man down in a fight with a solitary shot, but with that single blow fractured bones in DiPietro's face!

There are a lot of fights through the course of a season.  There are often injuries, but they are usually of the nick and cut variety.  If bones are damaged, usually it is to the punchers hand.

How hard would the blow have to be to actually break bones in DiPietro's face?


According to eMedicine from WebMD: Forces that are required to produce a fracture of the facial bones are:

The Islanders did not specify which part of his face suffered fractures, but going by the low end of the G-force scale from the above chart, 30 g is approximately the force of a golf club striking a ball at the tee.

Brent Johnson, we salute you, and please don't ever hit us!
Posted by The Plumber at 7:13 PM