A Time For Hockey Thanks 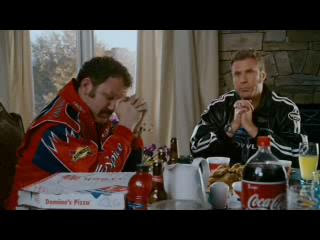 Before Ricky Bobby sits down to pray to the dear Lord Baby Jesus to thank him for a wonderful meal, his two beautiful sons, Walker and Texas Ranger, and his red-hot, smokin' wife, Carley, why don't we as hockey fans take a moment to reflect on what we are thankful for this Thanksgiving?

Want to know when Mike Richards' contract ends, or how much cap room exists for the Leafs in 2013?  Visit CapGeek.com.  They do an excellent job of keeping up with all 30 teams and cap transactions.

Dead bored?  Take a visit to hfboards.com. Click on the "Trade Rumors and Free Agent Talk" tab to read some of the most ridiculous trade proposals ever imagined... it also leads to some extremely witty banter. 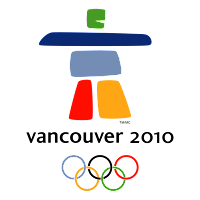 The 2010 Games in Vancouver were entertaining and provided plenty of dramatic finishes, but it really took a fat chunk out of the NHL season.  Too many players seemed distracted by the whole "playing for country" thing and never got on board for the regular season. 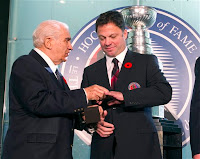 After a career that included more than 1,200 NHL games, 608 goals, 1,200 points, an indecent exposure charge and a day in jail for a hatchet job over Luke Richardson's head, the wait is now over for one of the leagues most colorful characters.

Proving that last season was no flash in the pan, up and comers Phoenix, Los Angeles, Colorado and Montreal continue to play like they belong on the short list of claimants to Lord Stanley.


They are doing it in different ways, but are getting it done despite roster changes, injuries and higher expectations.


It may not prove to be a perfect formula, but it is something. Nearly ever sport has struggled to maintain interest in their All-Star formats.  The NHL is no exception.  Brendan Shanahan, the league's VP of Hockey and Business Development, masterminded a new formula for putting on a new show.  Even if it doesn't re-invent the game, it's much better than the same old dog and pony. 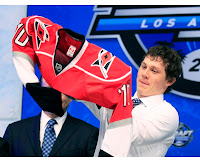 It hasn't been the names that we were expecting to see, but there have been some great performances put in by first year players.  Forwards Jeff Skinner, Logan Couture, Tyler Ennis and defensemen John Carlson and P.K. Subban have been outstanding. Netminders Michal Neuvirth and Sergei Bobrovsky have not only battled for the lead in wins for rookies, but for the NHL lead as well.

Ah, Ilya Kovalchuk.  The guy has been the story for two years now.  Last season was about if he would re-up with Atlanta or become the biggest UFA in a long time.  This year has been all about his new contract which cost New Jersey dearly, not only in dollars, but in fines and draft picks too! The Devils salary cap nightmare and his every misstep (shootout fails) keep his name constantly in the news. 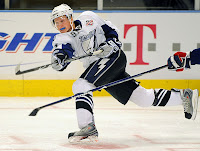 When the Lightning made him the top overall pick in 2008, much was expected of Steven Stamkos... but not this much.

Last season he tied Sidney Crosby for the most goals scored, unveiling a wicked one-time slap shot in the process.  This season Stamkos is showing that he can score from anywhere. He is making converts in each NHL arena he visits that his name belongs in the breath as Sid and Ovie.

The Winter Classic is it's own institution among hockey fans.  It's the NHL's showcase.  This season the league is making use of it's two biggest marketing options in Crosby and Ovechkin to be sure.

However, the game will get another boost when cable giant HBO features the game and a behind-the-scenes look into the month leading up to it. May it expose the world's greatest game to a whole new audience.


Also due to a binding endorsement contract that stipulates I mention Powerade at each grace, I just wanna say that Powerade is delicious and it cools you off on a hot summer day and we look forward to Powerade's release of Mystic Mountain Blueberry. Thank you, for all your power and your grace, Dear Baby God, Amen~
Posted by The Plumber at 2:43 PM