What Is Wrong With Marc-André Fleury? 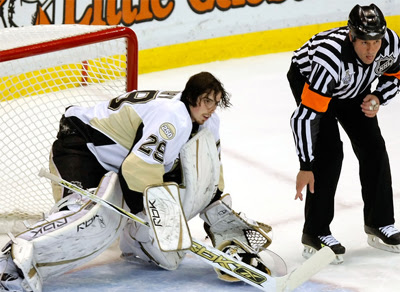 Just what is going on with "Flower"? Marc-André Fleury is one of the more divisive players in the NHL today.  Divisive not because of his personality or attitude, but because of his play.  Fleury has never been a stats guy.  He has not posted stellar save percentages. He has never wowed anyone with his GAA.  However, the one department that Marc-André Fleury has nearly always impressed is in the win column. 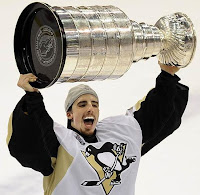 There are two camps in the MAF battle.  The Critics/Haters, who have always believed that Fleury surrenders too many soft goals, and has been the beneficiary of playing with a talented cast of skaters.  Then there are the Loyalists/Apologists.  This group clings to the Stanley Cup runs, his incredible athleticism, Pittsburgh's offensive-focused style of play and the "Secret Service Save."

Is this true? Let's take a look a seasons past.


Is this true?  It's only been five games, so let's look at every goal he has allowed thus far.


Game 1: Philadelphia
1. Danny Briere: A tip-in on the power play.  Not soft. No chance for any goalie.
2. Blair Betts: Even strength.  3 on 3 break into the zone. Fleury stops initial shot the rebound goes right by a Pittsburgh defender to Betts who shoots it into an empty net.  Not soft.  No chance for MAF.
3. Claude Giroux: Short handed. Awful giveaway by a Pens defender.  Giroux deeks and beats Fleury. Not soft. Fleury had a chance.

Game 10: Tampa Bay
1. Dana Tyrell: Even strength. A pass from behind the net is jammed past Fleury Not Soft.  Tough to stop.

2. Teddy Purcell: Even strength. Purcell carried into the zone a beat Fleury with a wrister. Not Soft, but iffy. He saw it all the way.
3. Vinny Lecavalier: PPG. 5 on 3 slapper. Not soft. No chance.
4. Martin St. Louis: Even strength. St. Louis blew past the Pittsburgh defenders and beat Fleury's diving poke check. Not soft. Maybe too aggressive/desperate.
5. Martin St. Louis: Empty net.

Five games.  One soft goal, one iffy goal.  Most goals Fleury had little to no chance to stop. We would say the critics are wrong too. (btw you can watch every goal here.)

So what IS wrong with MAF?

It's just hockey.  Sometimes you get the bounces... sometimes they get you.  When Fleury has started quickly... the occasional 4 goal game was offset by 5 goals by the Penguins.

In only five games this year, Fleury just hasn't caught many breaks. Defensive lapses, mediocre PK, combined with some low scoring efforts by Crosby, Malkin & Co. have added up to a poor start.

Has he played great? No  But has he been awful?  No way.  Had the Penguins' offense pasted teams with some 5 or 6 goal efforts along the way, (as they have in previous Octobers) no one would be talking about Fleury.  Yet, for now, his 1 win in 5 attempts has created an even greater divide.