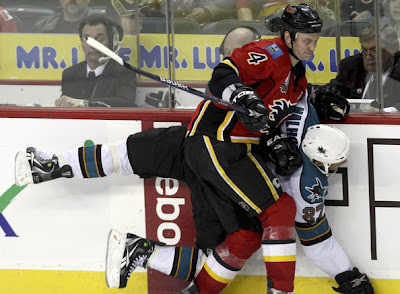 From the Calgary Herald:

Let the record show the Calgary Flames clashed with the New York Islanders Wednesday night in pre-season action in Saskatoon, but the real fireworks in the last 24 hours came off the ice.


The whole drama erupted Tuesday night when TSN panelist Michael Peca said he used to look forward to playing against Jay Bouwmeester, because he coughed the puck up so much.
Strong words, to be sure. And it didn't die there.
On Wednesday afternoon, in a radio interview with Rob Kerr and Dean Molberg on the Fan 960, Flames president Ken King lashed out at the audacity of Peca, a former player, saying such things.
“I think it was out of line,” King said in an interview with The Fan 960. “It was a guy talking about his peer. His colleague. Someone who he has played with.....To diss and take such a low-brow approach to laughing at or ridiculing one of the premier defencemen in the league, I just think is completely inappropriate."...
“We're not going to let Jay Bouwmeester or any player on the league be talked about in that manner by a colleague or a peer without challenging it,” King said. “That's just inappropriate....
“I think he ridiculed him. I think he laughed at him....You bet I'm sticking up for and defending our guy.”

Sure King is gonna stick up for his guy, but what does that leave for Don Cherry?  He's a former coach.  He's never criticized anyone he ever coached against?

Here is the video from TSN of what Peca said. http://watch.tsn.ca/featured/#clip354092

Essentially Peca said that Bouwmeester doesn't play tough, and is casual with the puck.  Not complimentary? Certainly not.  But is it "low-brow", disrespectful or the character assassination that King portrays it as?  No way.

Studio analysts receive criticism for being too soft on contemporaries, or if they are to vanilla.  Peca seemed to express an honest opinion on a career underachiever. Grab the torches and pitchforks!

Bouwmeester himself "shrugged off" Peca's comments on Wednesday.


"I don't care. If he wants to say that, that's fine. He's not playing anymore, so I don't care," Bouwmeester said Wednesday. "I'll probably have a different opinion of the guy that said it. Those guys on TV are what they are."

Bouwmeester knows that the only way to silence his critics is to go out there and prove himself on the ice.  We applaud King for coming to his defense, but we didn't see Peca "laughing at" anyone.
Posted by The Plumber at 2:47 PM