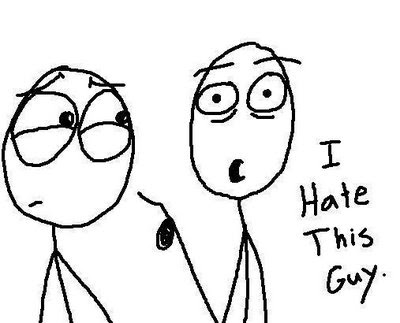 It's deader in the NHL news world than a "say all the proper p.c. things" Sidney Crosby interview on CBC.  Therefore, to offset things we thought we should stir the spirit of hockey discontent.

At the Winter Classic shindig a few weeks ago, our favorite TV celeb, Max Talbot kicked us off with his: Ovechkin is "a real douche" interview.  We'd like to keep that kind of thing going.

Here are some names of not well liked fellas to get the discussion started.

Sean Avery - Avery is supposedly not only disliked by fans and opposing players, but his teammates as well.  It is said that his trade from L.A. sparked a celebration by his former King's counterparts.  He talks a lot too. Georges Laraque accused Avery of calling him a "monkey" on-ice, and then there was the "sloppy seconds" remark concerning his ex, Elisha Cuthbert and Dion Phaneuf that did not win him any friends.  Most memorable scum bag move: Avery was at his unsportsmanlike best when he stood in "Fatso" (as he refers to him) Brodeur's crease waving his hand to shield his eyes during a playoff power play for the Rangers.


Matthew Barnaby - Barnaby paved the way for the modern agitator.  He was no goon, as he got his butt kicked in nearly every fight.  But, he was constantly yapping, picking and pecking at everyone on the opposing side without end.  Even in the locker room. Most memorable scum bag move:  In an interview he made reference to Lyle Odelein being so unattractive that he looked like Cornelius from Planet of the Apes. He still hates him to this day, recently recalling: "...it is hard for me to enjoy Planet of the Apes, because he is in it so much."


Todd Bertuzzi - Not known as a dirty player and was a cult hero in Vancouver. Most memorable scum bag move: He ended the career of Steve Moore when he punched him from behind and then fell on top of his head while already unconscious on the ice.  Some might say Bertuzzi just snapped and never believed he would cause the damage he did.  Some say they have no respect for the man.

Dale Hunter - He is thought of as one of the dirtiest players ever. Most memorable scum bag move: Pierre Turgeon scored a series winning goal in OT knocking out Hunter’s Capitals. Kind soul that he was, Hunter blindsided Turgeon into the boards, separating his shoulder.


Claude Lemieux - The "other Lemieux".  While won was a magician with the puck on his stick, this one was a magician with his stick in your teeth. His tricks were the aforementioned stick to the chops, elbows to head, knee on knee, and of course the hit from behind.  His name is synonymous with dirty player. Most memorable scum bag move: The broken jaw, broken nose, cheekbone and concussion suffered by Kris Draper courtesy of Lemieux and a slam into the boards. When Darren McCarty went after him, Lemieux pulled his famous "turtle" move.


Chris Simon - He is another guy with anger management issues and has been suspended at least 8 times by our count.  Unlike Avery, Simon admitted to using a racial slur against Mike Grier. He cross-checked Peter Popovic in the face, and did again to Ryan Hollweg which in effect ended his playing days. Most memorable scum bag move: Simon attempted to slice and dice Jarkko Ruutu’s ankle/leg when he was down on the ice.


Darcy Tucker - Tucker has a general rep as a cheap shot artist. Most memorable scum bag move: his knee on knee of Mike Peca in 2002.

Who do you hate?