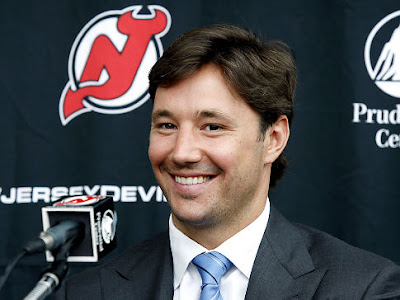 In a blatant attempt to upstage the NBA/LeBron "Decision", the Ilya Kovalchuk free agency saga continued to the next stage today!

OK, we are kidding about the upstaging part, but the independent arbitrator assigned to the Kovalchuk case ruled in favor of the NHL, thus voiding his mega contract with the Devils.  Dan Rosen, NHL.com Staff Writer reports:

Ilya Kovalchuk is once again an unrestricted free agent as systems arbitrator Richard Bloch has determined the NHL was within its legal right to reject the 17-year, $102 million contract Kovalchuk signed with the New Jersey Devils in July.

Bloch heard arguments from both the NHL and the NHL Players' Association, which filed a grievance on Kovalchuk's behalf, over two days in Boston last week. His decision came late Monday afternoon. As a result of Bloch's ruling, Kovalchuk immediately returns to unrestricted free agent status.

Upon announcing the contract was rejected, NHL Deputy Commissioner said the League would not approve it because it was a "circumvention of the Collective Bargaining Agreement."

The Devils can choose to re-work the contract in hopes of getting it approved, or Kovalchuk could look elsewhere. Los Angeles reportedly had an offer for 15 years and $80 million on the table before Kovalchuk agreed to re-sign with New Jersey.

How interesting would this drama get if indeed he did bolt New Jersey for L.A.'s offer? He would surely become the most hated man in Newark!
Posted by The Plumber at 6:34 PM