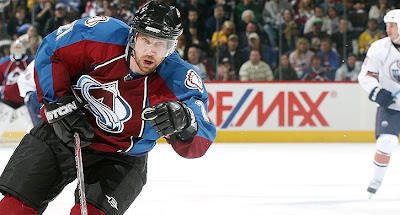 First of all, he was part of the ridiculous Eric Lindros trade.  In return for who is sure to be Max Talbot's "All-Time Number One Douche", the Quebec Nordiques received Forsberg, as well as Ron Hextall, Chris Simon, Mike Ricci, Kerry Huffman, Steve Duchesne, a 1993 1st round selection (Jocelyn Thibault), and another 1st round selection (later traded to the Toronto Maple Leafs) in 1994, and $15,000,000 cash. 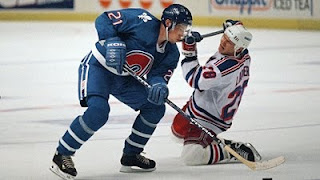 Forsberg alone was better than Lindros! ... but that is not the only reason why we love Forsberg.  They guy was a skilled as any player in his era, AND he was as tough as nails.  He could score goals, pass with pinpoint accuracy and drive his man into the glass with the best of them.

However, injuries began to derail his playing career.  As his last few years have diminished into something resembling a much less ego-driven and a ton less annoying version of the Brett Favre saga, we sincerely hope that this is the end of his attempts to come back to play in the NHL.


In an interview with Swedish television station TV6 following an exhibition game in his home country, the two-time Stanley Cup champion was not optimistic about his chances of continuing to play professional hockey.

"It's no good," Forsberg told TV6.  "I have no balance skating.  If it continues to be as it is today, I will not continue playing."

Still the guy cannot give up:


"We may give it a week," Forsberg told TV6.  "The foot, I can not do anything about the equipment but it could get better."

Please Pete!  It ain't gonna get better!  We love ya, but it's time for the retirement party already!
Posted by The Plumber at 12:08 AM