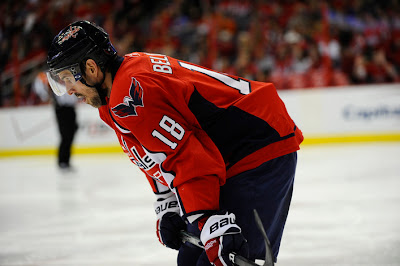 James Mirtle of the Globe & Mail has reported:

According to multiple sources, free agent centre Eric Belanger has a one-year deal in waiting to return to the Washington Capitals. The contract is believed to be a slight raise over the $1.75-million he made last season, to $1.85-million.

What's interesting is that he has been told not to announce where he's going, leading to Belanger telling the French language newspaper Le Soleil on Wednesday that he is about to sign but can't say where due to the fact the team he's headed to is working on a trade.

The intrigue! Alex Semin, who is in the last year of his $6 million per deal, came to mind first; but Mirtle believes it involves recently re-signed Tomas Fleishmann for a defenseman.

Washington is not believed to be in discussions for Tomas Kaberle, so who might that blueliner be? Vancouver's Kevin Bieksa? Edmonton's Sheldon Souray? Another surprise?  Whomever may be the target will fetch a big return in Fleishmann, who scored 23 goals last season for the Caps.

For Caps fans wondering aloud: "Belanger for Fleishmann?"  Wait to see the trade return and then see if you like the combined return better.
Posted by The Plumber at 2:25 PM