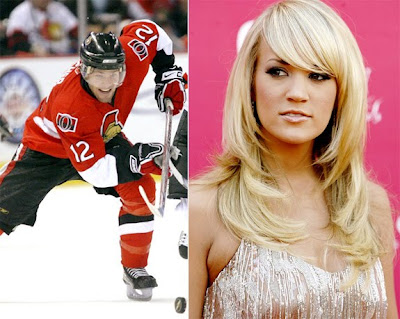 What most any casual fan knows about hockey is that celebrity chicks love to get "pucked" by hockey players.  It must be the modern day gladiator thing.

Now hockey's "most famous" couple is tying the knot.  From the Canadian Press:

CTV says the couple will get hitched at a resort that will be shut down exclusively for the "Fisher-Wood" wedding.

But the location of the wedding is being kept secret and most of the guests don't even know where the wedding will take place.

CTV says the guests won't find out where they're travelling to until they show up at the airport on Thursday and are given tickets to their destination.

Among the guests are Fisher's teammates, Chris Phillips and Chris Neil.