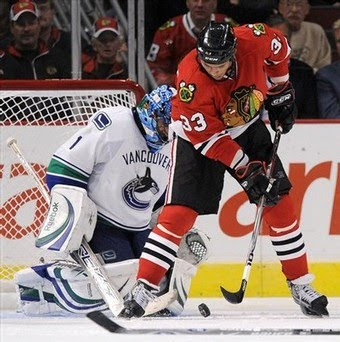 The Free Agency period is still in full swing. The 2010-11 cap went up giving some teams much needed room. We continue our look at the current cap status of each team, and breakdown what they have, or don't have in terms of room to maneuver this off-season.

Next up: the former home of the NHL's hottest UFA, Ilya Kovalchuk.
Atlanta Thrashers
Roster players under contract for 2010-2011* 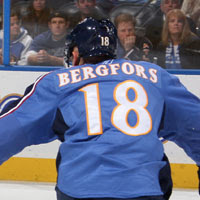 Analysis:
The Thrashers stayed in the playoff hunt until the last week of the season.  What was more remarkable though, was the fact that they remained in contention after they were forced to trade away Ilya Kovalchuk.  Considering the position they were in, Atlanta's return for their franchise player was more than most anyone anticipated.  Bergfors, Oduya and Cormier gave them a top six forward, a top four blueliner and a high level prospect. Bergfors in particular, responded very well to the new opportunity.
Going in to this off-season, the Thrashers shook up the management structure.  Longtime GM Don Waddell moved upstairs.  The Assistant GM Rick Dudley had the name "Assistant" removed from his title; and was charged with finding the team a new head coach.  Boston Assistant Craig Ramsey was hired in June.  The new direction of the team was beginning to fall in place.
With this year's free agent crop considered to be, overall, a weak one, the cap rich Thrashers took another route to rebuilding.  They traded for every player they could from the newly crowned Cup champions.  Since they had recently become prospect rich via the Kovalchuk and Lehtonen trades and a couple of good drafts, Atlanta was in a perfect position to out bid nearly anyone for the Blackhawks' cap casualties.
In two separate deals, the Thrashers acquired playoff hero Dustin Byfuglien, Ben Eager, Brent Sopel, prospect Akim Aliu and Andrew Ladd.  However to gain their services, the team had to part with top prospects Jeremy Morin and Ivan Vishnevskiy.
As of today the team has more than $27 million in cap space available, but only 15 roster players signed.  However, Atlanta's best free agents are RFAs, meaning that it is really only a matter of when they sign, not if... consider that Andrew Ladd, Ondrej Pavelec, Clarke MacArthur, Ben Eager, Bryan Little, Nicklas Bergfors will not only round out their roster, but also will only eat up another $10 million or so of cap space.  Which would leave Atlanta with more than $17 million... more than enough to accommodate an Kovalchuk or even two! Are you paying attention Ilya?
* all cap numbers provided by www.capgeek.com
Posted by The Plumber at 11:13 PM