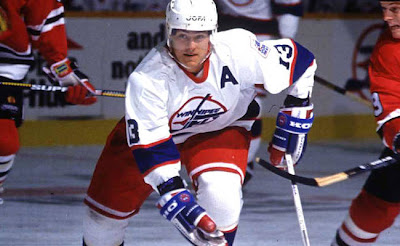 The Winnipeg Free Press keeps a regular online Special Coverage Section ongoing, which updates readers on the daily efforts to bring the Jets back to Winnipeg. As the front page of the section states:

It may happen next week, it may happen in three months... it may never happen.
The return of the NHL to Winnipeg is one of the most contentious subjects you can broach at a party or around the water cooler. We’re always looking to dispel the myths and bring the facts so you know exactly where our city stands, and this website section will do just that.

However, to find out about one Winnipeg man who believes that bringing the Jets back to the 'Peg  is a real emergency, you have to keep up with the Free Press' "Latest News"!

"He began the conversation by saying he wanted the Jets back. He was quite upset about it," a justice source told the Free Press on Wednesday. The incident occurred last year but was never reported publicly by police. The Free Press uncovered details this week through court documents.

The potential return of the NHL has been a hot topic in recent years, with many believing it’s a matter of when, not if, Winnipeg gets a team back. And while the subject usually triggers passionate debate, this is believed to be the first time it has ever prompted police action.

The emergency dispatcher politely told the angry caller there was nothing she could do to help him and reminded him that he was tying up a valuable resource before hanging up. But the man continued to phone back, claiming he had a lot on his mind.

"He had apparently been drinking and told police he hadn’t slept in days. He started talking about world conglomerates, things like that. He was hallucinating, obviously," said the source.

"Oviously"?  "He was hallucinating"? Does skepticism run that deep now days in Manitoba?  While it would be fabulous seeing a real north-of-the-boarder white out, and a ceremonial puck drop by Keith Tkachuk and Teemu Selanne; and we do agree that the NHL does need to relocate one of it's struggling franchise to hockey-mad Canada in the near future. We do not recommend calling the Po-Po over it!
Posted by The Plumber at 1:53 PM