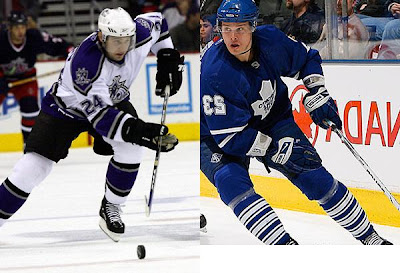 The New York Rangers announced that they have agreed to a one-year deal with UFA Alexander Frolov thats worth $3 million.

"Alex is a highly skilled player who we feel will play a key role in improving our offense and play in all situations," Rangers President and General Manager Glen Sather said in a statement.  "He is strong competitor and has the ability to play either wing position."

The 28-year old Russian sniper suffered through a down season in Los Angeles last year, scoring only 19 goals, his lowest total since his rookie season, and adding 32 assists.  He was also made a healthy scratch by Kings head coach Terry Murray, who openly criticized Frolov's desire.

In an interview with Russian newspaper SovSport on Monday, Frolov's agent Sergei Isakov blasted the Kings for the way they handled his client, stating that they deliberately spoiled his season.

Frolov reportedly turned down a four-year deal worth approximately $20 million to return to Russia and play in the KHL, as his agent stated that he wanted to play one more season in North America before deciding his long term future.

Classic Rangers signing?  Not quite.  While the $3 million payday may seem steep for a guy coming off his worst season, Frolov has serious ability.  Note that while he scored only 19 goals last season, he scored 32 times the season before.  However, he is a guy that has often been looked upon as a floater, as he is not the most diligent guy in his own zone.

Meanwhile, back in Los Angeles:


The deal has yet to be signed and terms have not been disclosed.


The 30-year old Ukraine native had 21 goals and 29 assists in 77 games last season, split between the Toronto Maple Leafs and Pittsburgh Penguins.  He added a goal and four assists in the Pens' 11-game playoff run.

"Poni" is nothing, if not consistent.  Since entering the League in '05-'06, he has scored 21 goals every season aside from scoring 23 in '08-'09, and 18 the year before, when he was limited to just 66 games due to leg and ankle injuries.  Pittsburgh fans were down on him after he failed to produce for the Penguins to end last season.  Yet, Ponikarovsky can be penciled in for his 21 goals and counted on to be responsible in the defensive zone as well.
Posted by The Plumber at 5:21 PM