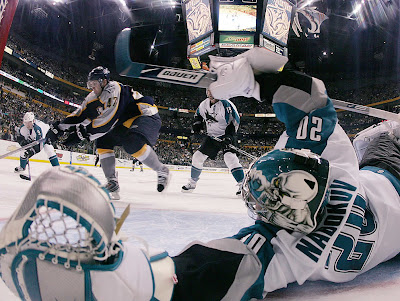 
Former San Jose Sharks goaltender Evgeni Nabokov is leaving the NHL to continue his career in Russia, according to reports.
Nabokov, who became a free agent after helping the Sharks to the Western Conference Finals this past season, signed a four-year, $24 million contract with St. Petersburg of Russia's Kontinental Hockey League, reported Russian newspaper Sovetsky Sport.

The Blackhawks have a backup goaltender that counts nearly $6 million against the cap, but nary a team wanted to pay for a proven winner with nearly 300 career wins?
Posted by The Plumber at 5:53 PM