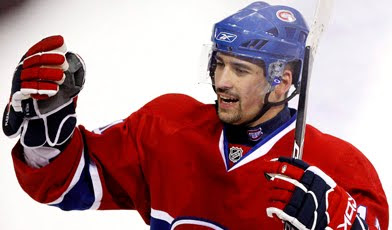 The Habs avoid becoming the Hab-nots today after inking their 2009-'10 scoring leader to a new deal.

Plekanec, who would have been one of the more sought-after unrestricted free agents come July 1, agreed to a deal believed to be six years and $30 million US.

This deal was a must for the Canadiens.  After moving Halak, the Habs had plenty of cap space to bring back their top centre.  There just would be no explaining it if they didn't... so, just sign right here Tomas. And here, and here... and initial here.  Done deal.

Next up for Montreal.  Call Lou Lamoriello to see if he would like to continue his "Back to the Future" movement with taking Scott Gomez and his awful contract off their hands.
Posted by The Plumber at 4:08 PM