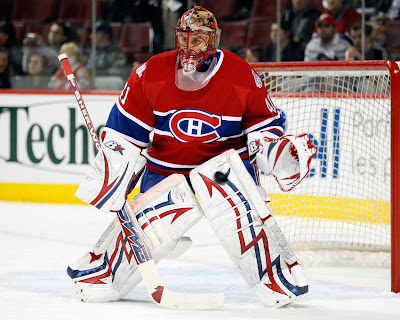 Did you feel that?  The earth shook, didn't it?


TSN.ca - The Montreal Canadiens dealt the goaltender who led them through their incredible postseason run, as the club has traded Jaroslav Halak to the St. Louis Blues.

Any time one gets the idea in their head that they know what the Canadiens are going to do... in comes the curveball!  After Carey Price's very underwhelming performance last season, Halak rode in to save the season and then went onto help stone both the Capitals and Penguins.

With both goaltenders as RFAs, the Habs had to keep Halak, right?  Wrong.

The return for Halak:

Lars Eller, forward, 6'1" 192lbs., was drafted 13th overall by the Blues in 2007.  He played in seven games last season for the Blues and scored twice.  He was named to the AHL All-Rookie team last season while playing for Peoria.

Ian Schultz, forward, 6'2" 205lbs., was drafted 87th overall by St. Louis in 2008.  He played his fourth season in Junior with Calgary of the WHL last season, scoring twenty-four goals in seventy games, and collected one hundred-fifty penalty minutes.

It is speculated that Halak's salary demands were in the $5 million range, but it is now clear that Montreal did not see him as valuable as Price... for the price.
Posted by The Plumber at 4:29 PM