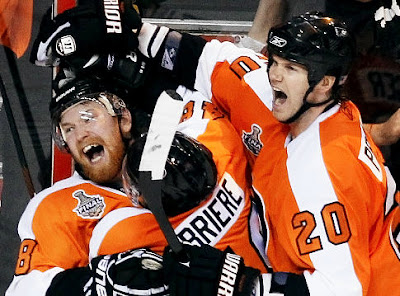 Next up: the Cup runner-up . 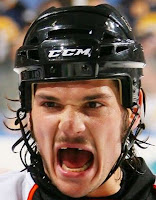 Analysis:
The good news is that  all of their core is intact.  However, questions abound in net and on defense.  They will need to sign goaltenders, but how many will they need?  Last season was a virtual revolving door between the pipes.  Will they want Emery back?  Will they retain Michael Leighton at a higher price? The Flyers are also in need of blueliners at both the NHL and AHL level.


As far as retaining what they had, outside of Leighton, Asham and Krajicek, the team has little to be concerned about regarding their UFAs.  All three of those players were key down the stretch, and all came at a nominal price.  Will they want more? Philadelphia's RFAs Coburn and Parent are almost certain to be retained.  No doubt they will be seeking raises.  At forward, caveman Carcillo and Powe both played significant roles with the team and a very likely to be resigned.

The big question will be if they go after a top FA netminder.  Certainly Nabokov, Turco, Chris Mason, Dan Ellis, or even Jose Theodore will be talked about. Yet, to add one of those guys would cost the team the ability to go after quality depth on the blueline, and even force them to make other moves to free up space.

Having $8 million + in space, but being in need of signing a goalie, a forward or two, and at least three defensemen, means that you really have no cap space at all.


* all cap numbers provided by www.capgeek.com
Posted by The Plumber at 10:23 PM