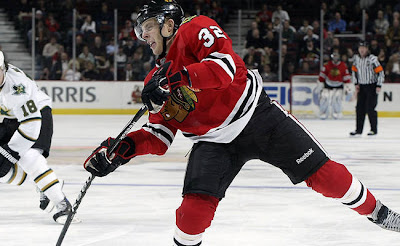 The reigning Cup champs got some much needed cap relief when they traded with Atlanta a few weeks ago, but they weren't done. TSN is reporting the Kris Versteeg has been sent to Toronto:


The Chicago Blackhawks are sending forward Kris Versteeg to Toronto in a five-player deal.


He had 44 points in 79 regular-season games last season.

Versteeg added 14 points in the post-season for the Stanley Cup champions.

The Maple Leafs give up forwards Viktor Stalberg, Chris DiDomenico and Philippe Paradis in the deal.
Toronto also gets the rights to left-winger Bill Sweatt.

Chicago is now more than $8 million under the cap, but with only 13 players signed to the active roster.
Posted by The Plumber at 11:08 PM