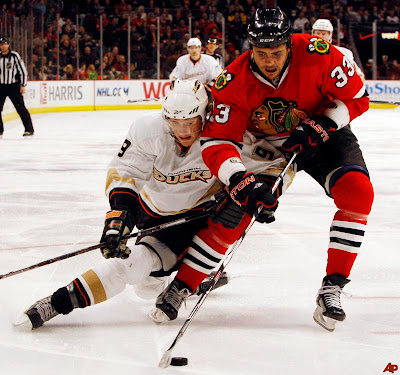 The Chicago Blackhawks were/are in a serious bind with regard to the salary cap.  It was a certainty that they had to move players... and it appears that the dealing has begun.  TSN reports:


Dustin Byfuglien, one of the breakout players for the Stanley Cup-winning Blackhawks last season, is in the process of being traded to the Thrashers, pending a trade call.

Byfuglien, along with Brent Sopel, Ben Eager and Akim Aliu, will be headed to Atlanta in exchange for the 24th overall pick at the 2010 NHL Entry Draft, the 54th pick, Marty Reasoner and Jeremy Morin.

The 25-year-old forward had 17 goals and 17 assists in 82 games with the Hawks last season.
At 6'4, 257 pounds, the Minnesota native will bring his thunderous size and strength to the struggling Thrashers franchise.

So the Blackhawks unload a total of $5,333,333 in cap money (Byfuglien and Sopel), a pending RFA (Eager), and a prospect who was sent down to the ECHL (Aliu). 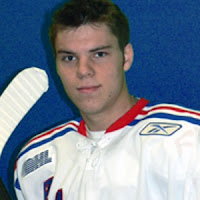 In return, they take back $1,150,000 in Reasoners's cap figure; which becomes a net cap savings of $4, 183,333.  In addition, they acquire one of Atlanta's top prospects, if not their top prospect in Morin (pictured) and a first and second round pick.

After his playoff performance, Dustin Byfuglien's value was at an all-time high.  This trade clearly reflects that the Hawks were getting big value in return for their big body.  We say the recent champions did very well.
Posted by The Plumber at 6:19 PM