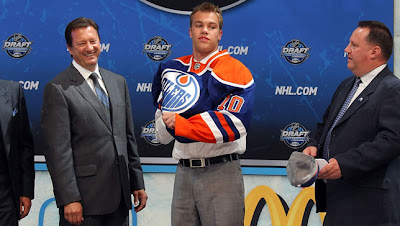 Everyone knew who the top two selections of the draft would be.  The mystery was in what order that Taylor Hall and Tyler Seguin would be taken. We all expected trade activty, and there were moves made... just not as many as were rumored.

Once Hall was selected, the draft went on auto-pilot for exactly one pick.  The story the rest of the way unfolded as highly ranked prospects began to slip and the trades began to happen.

Defenseman Cam Fowler, once thought to be a contender for a top three selection wasn't taken until twelth by Anaheim. 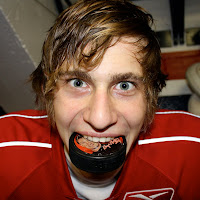 Upon the completion of the first round, the Kirill Kabanov watch began. Kabanov was considered by many to be as talented as any player in the draft.  However, teams began to consider him a major risk after he appeared to fall in to disfavor with both his QMJHL team and the Russian National team.  Rumors began to circulate about his commintment to playing in North America and that his agent had dropped him.  Kabanov was taken 65th overall by the Islanders.  They may have ended up with one of the best players in the draft or a simple head case, but the Isles have little to lose.

The trades began with Ottawa sending the 16th overall selection to St. Louis in exchange for defenseman David Rundblad, the Blues' first-round pick in 2009 (17th overall).

The Pittsburgh Penguins made a splash when they acquired the rights to defenseman Dan Hamhuis from the Philadelphia Flyers for a 2011 third-round pick.

The Florida Panthers traded defenseman Keith Ballard to Vancouver in a four-player deal that included the Canucks’ first-round pick. Ballard and forward Victor Oreskovich were sent to the Canucks for forwards Steve Bernier, Michael Grabner and the 25th overall selection.

... and finally, CSN Philly reported: "According to league sources, the Flyers have a verbal agreement in place with the San Jose Sharks to fork over a seventh-round pick next season if they can sign San Jose’s Evgeni Nabokov before July 1, when he becomes an unrestricted free agent."
Posted by The Plumber at 12:46 AM