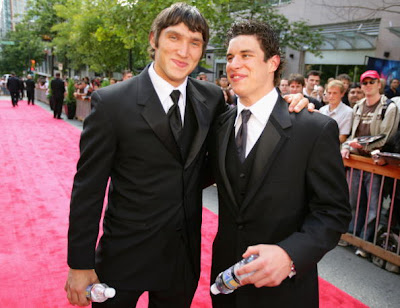 It's that time of year again.  the NHL Awards... from Las Vegas, Nevada.  It's only a matter of time until the Hockey Plumber gets to actually vote on these things (the Professional Hockey Writers' Association has been pounding on our door all season to join them!), but we figured we'd jump the gun and give our vote this season anyway!

Hart Memorial Trophy
Given to the player judged to be the most valuable to his team. The winner is selected in a poll of the Professional Hockey Writers' Association in all NHL cities at the end of the regular season.

If we had a vote: Crosby. Sid the Kid shared the League lead in goals, was tied for second overall in scoring and did it in a season where he absolutely had to deliver.  Malkin had an "off year" and the Pens were defending Cup champions.  Probably Crosby's best season to date.


Prediction: Sidney Crosby.  We believe that the PHWA sees it the same way we do.

Vezina Trophy
Given to the goalkeeper adjudged to be the best at this position as voted by the general managers of all NHL clubs.

If we had a vote: Miller.  Brodeur and Bryzgalov also had fantastic seasons.  We give "Millertime" the edge due to the fact that Buffalo is a less defensively-focused system than either of the other two teams involved.  Miller was spectacular in long streches and his numbers are just as impressive, if not more so than anyone else.

Prediction: Ryan Miller.  His great season, in addition to the impression he left in the Olympics, will stick in voters minds.

Calder Memorial Trophy
Given to the player selected as the most proficient in his first year of competition in the National Hockey League. The winner is selected in a poll of the Professional Hockey Writers' Association at the end of the regular season.

If we had a vote: Myers.  All three performed admirably this season. Myers was not only a top performer all season, but he was counted upon by his team from the beginning.  He played in all situations and was aggressive, poised and even intimidating at times.

Prediction: Jimmy Howard.  We believe that voters will not be able to justify ignoring his staggering numbers in net, particularly when it's considered that he did not have the starting job until nearly mid way through the season.  There are no bad choices here.

James Norris Memorial Trophy
Given to the defense player who demonstrates throughout the season the greatest all-round ability in the position. The winner is selected in a poll of the Professional Hockey Writers' Association at the end of the regular season.

If we had a vote: Keith.  Green has impressive offensive skills, but if he didn't win last year when his number were so much better, he should not win it this year.  Doughty was very impressive, but maybe more so because it was only his sophomore season.  Keith plays a compete game. He logs tons of ice time, plays the power play, scores, hits, plays a little nasty and will sacrifice his body.  Check out his teeth after the Cup win!

Prediction: Duncan Keith.  He does it all.

If we had a vote: Tippett.  He walked into a certain disaster.  The team was in bankruptcy... was sure to be moved.  They had a poor season last year and no one gave the Coyotes a even a prayer to make the playoffs.  Yet, under Tippett's guidance, Phoenix not only made the post-season, they nearly won the division.


Prediction: Dave Tippett.  Sacco had nearly as impressive a season in his rookie year, and Trotz is always deserving for what he does each season in Nashville.  However, what Tippett accomplished amidst all the distraction was nothing short of amazing.

Frank J. SelkeTrophy
Given to the forward who best excels in the defensive aspects of the game. The winner is selected in a poll of the Professional Hockey Writers' Association at the end of the regular season.


If we had a vote: Datsyuk. This award could be renamed after him.  Regardless of how the award is defined, traditionally this award goes to the defensive minded forward who scores the most points; but I've never looked Datsyuk as a defensive player, really.  He's just that good.  He is Detroit's best offensive weapon, but he is a great face-off guy, dangerous on the PK, and maybe even their best back checker... which is saying a lot.  His takeaway numbers are always impressive, but this year, second place wasn't even close!

Prediction: Pavel Datsyuk.  We won't be surprised if it is someone else, due to the fact that the writers just may be sick of him winning every year.

Lady Byng Memorial Trophy
Given to the player adjudged to have exhibited the best type of sportsmanship and gentlemanly conduct combined with a high standard of playing ability. The winner is selected in a poll of the Professional Hockey Writers' Association at the end of the regular season.

If we had a vote: St. Louis. This is a toss-up.  We give the edge to St. Louis as he had the most points and the least PIMs.  MSL is a guy who always plays hard, but never crosses the line, and the officials obviously see him that way too.

Prediction: Martin St. Louis.  The stats should give him the edge with voters too.

Bill Masterton Memorial Trophy
Given to the National Hockey League player who best exemplifies the qualities of perseverance, sportsmanship, and dedication to hockey. The winner is selected in a poll of all chapters of the Professional Hockey Writers' Association at the end of the regular season.

If we had a vote: Theodore. We equally love and hate this award.  How do you tell a player who has sacrificed for the love of the game that someone else's sacrifice was greater?  Well, we are gonna do it here... Jose Theodore and his wife lost a child shortly before the season started.  As a father myself, THAT is the most awful thing imaginable, so Theodore wins, period. Sincerely, I want him to wins it.


Prediction: Jose Theodore. It's unimaginable that he doesn't win.