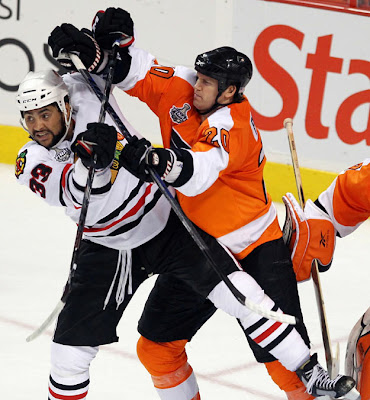 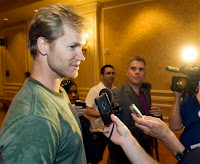 Chris Pronger is the Teflon Don.  He can be as cheap, unsportsmanlike and as big a defensive liability as anyone in hockey... but then, he cracks a joke in the post game  presser, and the media declares him an "intimidating leader" and "top contender for the Playoff MVP".  John Gotti and Bill Clinton have nothing on Pronger's spin machine.

Dustin Byfuglien can play.  He proved that he is not just a linebacker on skates. Byfuglien used his surprising speed, and nose for the net, to his and the Hawks best advantage.  He was a major factor in nearly every game, every round.  As "Buff" went, so did the Hawks.

Who said you need elite goaltending to win the Cup?  The winning team scored four or more goals in five of the six Final contests.  If you would have told hockey fans that the trio of Antti Niemi, Michael Leighton and Brian Boucher would be battling for the Cup at the beginning of the season, some guy wearing a Cam Ward jersey would have laughed aloud!

The Philadelphia Flyers showed serious guts and resolve... all season.  Their big goaltending acquisition, Ray Emery, never could stay healthy.  By December, they were in shambles.  They had to scramble to even make the playoffs.  After a very favorable Round One matchup against a team they own, New Jersey, they pulled off a huge comeback against Boston, out played a rouge-hot Montreal goaltender and continually came back against a powerful Blackhawks team.

Daniel Briere played the best hockey of his entire career in this series.  How good was he?  His Finals scoring totals were Wayne Gretzky/Mario Lemieux level. Twelve points!

What can be done about some officiating consistency.  A year ago, only a near decapitation got you two minutes.  This year, staring too long at an opponent was a double minor... in the first two periods.

Mike Emrick is simply the finest broadcaster on the national stage in all of sports.  He just compliments every game perfectly.  Not too much, not too little.

The Flyers fans showed an uncharacteristic level of class after witnessing their team elimination is bizarre style.  No chanting obscenities, no booing, no throwing of beer cups, no alcohol guzzling by children... here's to you Flyer fan.
Posted by The Plumber at 12:38 AM