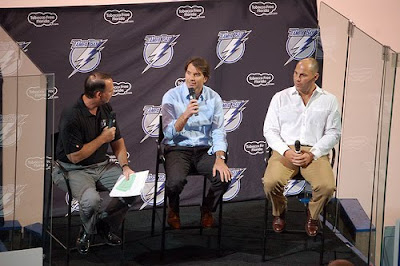 "Now that the 2009-10 Tampa Bay Lightning season has concluded, we have decided to replace Brian and Rick," Vinik said in making the announcement. "Our hockey operations department needs a fresh start in order to help us fulfill our goal of being a world-class organization. I'd like to thank both Brian and Rick for their dedication and service to the Lightning.
"Our search for a Chief Executive Officer is well underway and we are in the process of interviewing candidates. After the new CEO is hired, he will hire our new General Manager in time to prepare for the draft and free agency periods."

A welcome change, we are sure, for Lightning fans to see their franchise being handled properly.  Jeff Vinik certainly has grasped the concept of letting business people handle the business and allowing hockey people to handle the hockey!

We are not the first to suggest this, nor will be the last, but just how many times do you suppose Vinik has already called Steve Yzerman.  If you are an organization seeking both "hockey operations" and "world class", need the search extend any further than Stevie Y if he is willing to talk to you?

As far as the now departed staff members Rick Tocchet and Brian Lawton, Tocchet did a reasonable job as coach given the circumstances he inherited.  Between the bickering, clown, owners Oren Koules and Len Barrie, and wanna-be ringmaster in GM Lawton, Tocchet entered into a literal, three ring circus, after Barry Melrose's incredibly short tenure as coach.

Tocchet seemed popular with his players and is credited with Steven Stamkos' rapid development, but he still was failed win much, particularly when considering the talent that was/is on the Lightning roster.

We don't believe that Lawton should be afforded the same latitude as Tocchet. However, in his defense, having to constantly deal with the polarizing viewpoint of both owners could not have made his running of the day to day operations in Tampa easy.

We applaud the vigor and approach of Jeff Vinik.  He seems to really "get it", which is not only good news for the Lightning, but also the NHL.
Posted by The Plumber at 4:43 PM