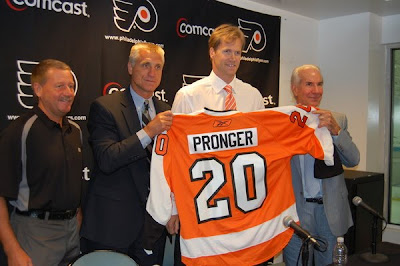 Agree with him or not, Larry Brooks of the New York Post sure got our attention.  Neatly packaged in a story regarding his conversation with Glen Sather, in which the Rangers' GM told Brooks that his team was just one Oren Koules away from acquiring Steven Stamkos from Tampa, was a not-so subtle pot shot at the Flyers and Chris Pronger.


There is something foul in Philadelphia far beyond the goaltending fiasco that has become the focal point of the NHL's most disappointing team.

We're not there on a day-to-day basis, so we can't claim first-hand knowledge, but when two league GMs were asked what they perceived to be the problem, neither hesitated.

"Pronger," each said, referring to Chris Pronger, the defenseman who has a reputation for splitting locker rooms as well as heads.


At first glance, one may read this and say: "Yes Larry, you are NOT there every day and neither are those other team's GMs!"

However, do you need to be there to understand that Pronger is a divisive force in the locker room?


We recall that right before coach John Stevens was fired in December, CSNPhilly.com detailed a little tag-team action by Flyers GM Mike Holmgren and Chris Pronger, as they spoke about the team's captain, Mike Richards.

Holmgren, speaking of Richards and the problems facing the Flyers, stated that "He knows that he has experienced guys around him he can lean on if he has to." which was followed up by Pronger adding: “He hasn’t asked me for any help,” and then refers to Richards as a "kid" several times afterward, one may get the picture that these two, at the very least,  did not go out of their way to lend credibility to the established leader in the dressing room.

With all apologies to Puck Daddy, as they also referenced Brooks' story and the following reply article from Tim Panaccio of CSNPhilly.com.


When asked what he thought of the story, Pronger replied, “I can imagine what it is, because he [Brooks] said the same thing about me in St. Louis.

“He likes to stir the pot. He’s good at it. I don’t take credence to anything that comes from people like that’s mouth.”

The issue in the Flyers’ dressing room is the same now as it was at the start of the season. Many of the younger Flyers don’t appreciate Pronger’s abrasive criticisms about what it takes to win and prefer the more honey-coated approach by team captain Mike Richards.

Pronger has won a Stanley Cup, and you need to recall what general manager Paul Holmgren said about his coming here last summer: that he expected Pronger wouldn’t tolerate mediocrity, and that his defenseman would be quick to rattle his saber when things went awry and wouldn’t be afraid to do it vocally behind closed doors.

You don’t win a Cup without hard-asses in the dressing room.

Strangely enough, he seems to bolster Brook's assertion. The last time we checked, when you have an established leader and then someone with in the ranks vocally offers opposing messages, it is considered an effort to divide opinions, no? 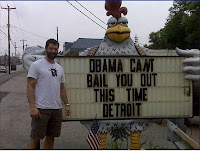 We won't quote it here, but there is also an allusion to the fact that Ray Shero acquired Billy Guerin last season for the same purpose on the Penguins. Shero was unavailable for comment, but no doubt, he did NOT bring Guerin in to sabotage Crosby's leadership, nor be a "hard ass".  From everything that we have seen or read, Guerin was a calming and relaxing influence in Pittsburgh's Cup run.

Furthermore, indicating that the GM himself, wants Pronger to exacerbate the situation; is only consistent with the dividing message sent back in December!

Note to the Flyers: There is a position within every team that is to monitor effort, "rattle sabers" when necessary, and be abrasive at times; but in a manner that actually unites a team!  They are called coaches.
Posted by The Plumber at 1:58 PM