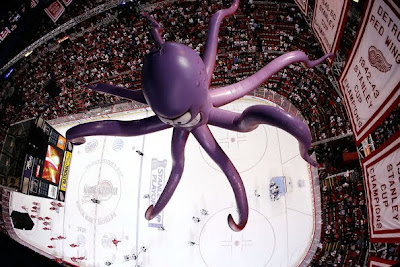 Once left for dead, Detroit takes over the top spot. Buffalo, Nashville and Ottawa climb.  Flyers continue to fall.

The Wings are winning.  Seven straight in fact, and ten of their last eleven. They are scoring goals in bunches and playing their puck possession  game at the highest level.


2. (1) Washington Capitals
With little left to prove, the Caps are coasting.  Yet, even in a three game skid, they managed a pair of points! It is tough to get a real read on the team at the moment, but they are far ahead of the rest of the pack still.

3. (2) Phoenix Coyotes
Losers in four of five, Phoenix still has a division title and a higher seed to play for.  Their offense has gone to sleep in the last week.  Maybe the ultra hot Lee Stempniak can do the waking.

4. (9) Buffalo Sabres
The Sabres have won seven of their last nine. Ryan Miller hasn't missed a beat since the middle of March and is receiving some offensive support.  They have moved ahead of the stagnating Atlantic leaders for the number two seed in the East.

5. (10) Nashville Predators
The Predators have won nine of their last dozen.  In the three games that they lost during that span, Nashville tallied just one goal.  Rinne has been outstanding this entire season, but he can't score the goals. When the Preds score three, it's almost an automatic win.

6. (4) San Jose Sharks
Their four game win streak came to a halt in Dallas on Wednesday.  The Shark either win big or lose big lately... not a good sign headed into the post season. Joe Thornton has been out, but his injury is not considered serious.


7. (7) Vancouver Canucks
The Canucks have been on a roller coaster ride lately.  Luongo was torched Thursday by the Kings, one game after nearly shutting out Phoenix. P.S. In case you didn't notice, Henrik Sedin leads the NHL in scoring!


8. (5) Pittsburgh Penguins
The Penguins have lost four of six, yet have won two of their last three... which way are they going?  Unlike New Jersey, Pittsburgh has an excuse as Malkin and Gonchar have continued to miss games due to injury and illness.  Will they flounder their way to a division title or get their act together for the last half-dozen games?


9. (3) New Jersey Devils
Losers in three of their last four and five of seven, only the similar slide by Pittsburgh has kept them in the division race for the Atlantic.  They are not scoring and have looked worn out.

10. (8) Chicago Blackhawks
The Hawks lost a total of nine games in March, their worst month of the season.  They snapped their most recent skid with a win against Minnesota on Wednesday, but the team has played very poorly for an extended stretch.


11. (13) Ottawa Senators
The Sens have now won six in a row.  Yet, no one really believes in this team yet, due to the fact that they lost eight of nine in March prior to their newest streak.  Ottawa has the ability to beat the best, and likewise be beaten by the worst.

12. (12) Los Angeles Kings
The Kings put an end to their four game skid by winning their last two, including a beat down of Vancouver.  Does this mean that their goal scoring drought is over?


13. (15) Calgary Flames
The Flames have not given up.  Just two points behind the suddenly struggling Avs, their Friday night match up is a life and death struggle. Calgary fans have to be in shock that their team is even in this position, but it sure makes for an exciting finish.


14. (17) Anaheim Ducks
Winners of seven of their last nine the Ducks will not go quietly.  Their season has been a wasted opportunity, but there is no quit in Randy Carlisle's group.  Selanne will not get to end his career in the playoffs, but he did get to join the 600 goal club.

15. (11) Colorado Avalanche
The Avalanche are spiraling.  Colorado has lost six of seven and are in very real danger of being bumped from the eighth spot in the West.  Were they not a near lock just a few weeks ago? Missing the playoffs now would just be a giant turd on what would have been a near miraculous season.

16. (14) Montreal Canadiens
Montreal's recent skid has landed them in survival mode.  Five teams still have a realistic shot at the final three spots in the East.  They have a favorable five game tilt remaining, but literally, anything can happen!

17. (16) Boston Bruins
Up and down, back and forth, Boston just can't seem to get over the hump.  they have been in control of their own destiny for the post-season, but it still remains in doubt. Thursday's shut out loss to Florida's backup goaltenders has to be frustrating.


18. (18) St. Louis Blues
The Blues month of March and entire season can be summed up as follows:  They have done just enough to remain hopeful, but just short of making it.  Next year fellahs.


19. (19) Dallas Stars
Dallas has received some good goaltending performances from Lehtonen and Turco lately.  The problem has been that the offense doesn't always support those performances.  However Steve Ott lent his support Thursday notching his first career hat trick against the Sharks.


20. (22) Atlanta Thrashers
The Thrasher remain close and hopeful for a playoff berth.  However, the hockey gods do not favor this team.  They face murderers row in April.  Washington and Pittsburgh twice and the Devils for the other game.  If they make it, they sure as hell deserve to be there!


21. (25) New York Rangers
They are four points out of the playoffs, but have an easier schedule than some others.  Gaborik and crew are scoring again, but it just may not be enough.  At least it's baseball season soon for New York.

22. (26) New York Islanders
The Isles would love to be spoilers in April.  They kicked off the month by putting a hurt on Philly.  Next in the cross hairs? Montreal, Pittsburgh and New Jersey. The Isles have quietly won three of four and want to end the season on a positive note.


23. (21) Carolina Hurricanes
After an abysmal beginning, Carolina could finish the season at .500 or better.  They have been damaging the hopes of the lower seed contenders in the East for weeks and have a few more cracks to go at that job in April.  The will miss out of the post-season, but just by a hair!

24. (23) Minnesota Wild
This was a rebuilding season for Minnesota and it has played out as such.  However, they have reason to look forward to good things, despite their shut out by Chicago on Wednesday.

25. (20) Philadelphia Flyers
The Flyers will play goaltender number seven on the season if Sebastian Caron, the Swiss Elite League, hits the ice for them before the regular season ends.  Philadelphia has flat out stunk it up in March and have yet to clinch a post-season berth.

26. (24) Toronto Maple Leafs
Toronto has been playing some decent hockey in March and have four games remaining against bubble playoff teams in the East.  Who will they drag down with them?

27. (27) Columbus Blue Jackets
Columbus had a fairly successful month and beat the Hawks twice in as many weeks.  However, they close out the season as a whipping post for the smoking hot Red Wings.  Nikita Filatov where are you?

Scott Clemmensen shut out Boston Thursday, but really, all that Florida has to look forward to is the battle for the state championship, two game tilt with Tampa to close out the season.

29. (29) Tampa Bay Lightning
Tampa closed out a miserable March with a shut out victory over a listless Pittsburgh team on Wednesday night.  Their primary focus now is getting super sophomore Steven Stamkos to fifty goals.

30. (30) Edmonton Oilers
Two losses, two wins, five losses, three wins, three losses.  That was Edmonton's March.  All streaks.  They have six games left in April.  Will they get to end this season of shame with nine straight defeats?