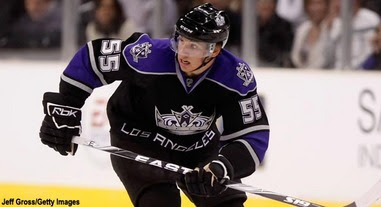 The Kings had all intentions of making the playoffs this season. Which they did.  However, they surpassed expectations by staying in contention for the division title for most of the season, and being the beneficiary of some outstanding play by their young players.

Like the Coyotes, the Kings are a competitive team today, but also have a fantastic stock of prospects in the system just waiting for their opportunity.
Brayden Schenn, C - #5 overall 2009 Draft. Known in Toronto simply as "Luke's brother", Brayden has carved a spot for his own identity.  Profiled as "a smooth skater with good acceleration," Schenn found a way to improve his numbers this season at Brandon in the WHL, while playing in eleven less games due to his time in the NHL and the WJC.  He has a mean streak, which fans love, and all around skills which the team loves.

Jonathan Bernier, G - #11 overall 2006 Draft. Bernier is a hybrid style goaltender that has been tremendously successful at the AHL level.  He has great lateral speed and reflexes, similar to that of Marc-Andre Fluery.  Bernier played in three games with the Kings this season and was spectacular.
Thomas Hickey, D - #4 overall 2007 Draft. A smooth-skating, all-around skilled blueliner, Hickey plays with and edge to his game that belies his average size. He had a strong season in '08-'09 with the WHL's Seattle Thunderbirds, and won a gold medal in that season's WJC.  However, most of his '09-'10 season was lost due to a shoulder injury and subsequent surgery.

Andrei Loktionov, C - #123 overall 2008 Draft.  Praised for his dedication to a two-way game, Loktionov is equally at home in both the offensive and defensive zone.  He is a skilled playmaker, as evidenced by his assist totals at both the junior and AHL levels.  He also showed ability to score goals during his only season in the OHL with the Windsor Spitfires.
Colton Teubert, D - #13 overall 2008 Draft. Teubert is a big, strong, shut-down defenseman.  His knack for frustrating his opponents' efforts is evidenced in his selection to the WJC teams at both levels.  He won't put up offensive numbers, but will be a great future pairing with another prospect Thomas Hickey.
* Other notable prospects:
Vyacheslav Voinov, D
Kyle Clifford, LW
Andrew Campbell, D
Jeff Zatkoff, G
Martin Jones, G

The Kings have a nice core of young, talented forwards, such as captain Dustin Brown and Anze Kopitar, and a very strong top end on the blueline, that includes Norris Trophy finalist Drew Doughty and Jack Johnson. Goaltender Jonathan Quick had a breakout season in '09-'10.  Add them to this impressive mix of prospects and the Kings look to have a very bright future in La-la land!
Posted by The Plumber at 6:30 PM