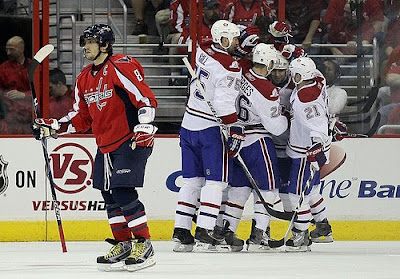 If you didn't believe it before, you have to believe it now: Scoring a ton of goals in the regular season, doesn't mean anything in the playoffs. 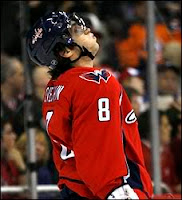 This is Ovechkin's team.  He will be blamed, but this is not his failure.  He contributed plenty.

Rewind to last season's Final.  Detroit concentrated their defensive effort on Crosby.  It worked on Crosby's line.  Problem was, Malkin and Talbot took advantage and became heroic figures.  Where were Ovechkin's Malkin and Talbot?  No where to be found. 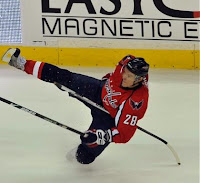 Even though we are hesitant to criticize him, Backstrom disappeared when Ovie went cold. However, Alexander Semin was completely useless for the entire series.  Unlike the captain, Semin is a "soft" player.  Without space and time, he doesn't battle.  He gets shoved around and was a complete non-factor for seven straight games. Simply put: He is a soccer player.  Forty goals in the regular season.  Not a single goal in the post-season.

Mike Green?  Interchange his name with Semin and you have his performance summed up as well.

What can you blame on Ovechkin?  Adding fuel to the flame.  Yes.  Halak was an alien being in net after the Habs went into the 1-3 hole.

Alex the Gr8 saw Halak's hand shake again after Game 7 when Ovechkin had to offer congratulations.

Montreal moves on.  Their reward is to face the defending champions.  Will Halak continue the show?  Who knows.  What we do know is that it is tee time for the Caps.
Posted by The Plumber at 10:25 PM