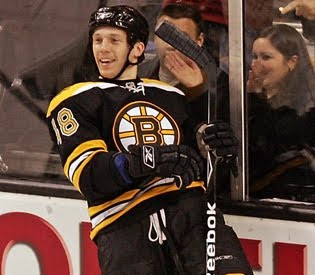 The Bruins may be playing without their best player.  They may be fighting for their playoff lives.  However, today, this same Boston team accomplishing something truly remarkable.

At the end of the first period in their final regular season home game against Carolina, Matt Hunwick was assessed with a two minute penalty for hooking. No goal was scored in the final eighteen seconds of the first, therefore the penalty would carry over into the second period.

The short handed trio of goals on the same PK was a NHL record.  The Bruins closed out the game with an empty netter with one minute remaining.  Boston won a game, set a new NHL record and assured their place in the 2010 post-season all in one afternoon.

Matt Hunwick has 32 PIMs on the season. He surely has never had a better two minutes in the penalty box in his entire hockey career.
Posted by The Plumber at 3:44 PM