AO's Halak Assessment: Being a Good Captain, or Poor Sport? 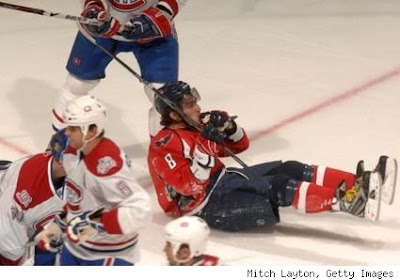 After a profound Game Two comeback in which the Capitals overcame a 4-1 deficit to beat Montreal 6-5 in OT, Washington captain Alex Ovechkin told reporters that he saw Habs goaltender Jaroslav Halak 'shaking' after a goal was scored by the Caps Eric Fehr.


"I watched the replay when Fehr scored the goal and his arm was shaking when he drank water," Ovechkin said of Halak after he allowed Eric Fehr to score on a breakaway in the first period of Game 2.

When informed of Ovi's comment, Halak refused to reply, choosing not to engage the Caps leader off the ice.

So is Ovechkin's revelation just the duty of a good captain, in an attempt to take advantage of any psychological edge he can give to his team, or is it just a tad bit on the unsportsmanlike side that may come back to haunt him and his teammates by providing the Habs with a little added motivation for Game 3?

We will find out at least part of that answer tonight.  Game On!
Posted by The Plumber at 7:06 PM