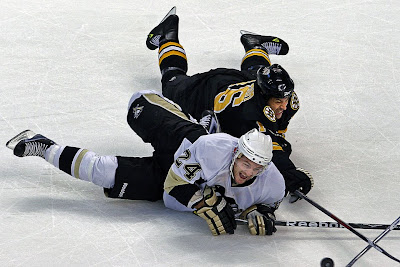 A few days ago we discussed how certain media pundits have a tendency to overreact to controversial hits, etc...

In the past, we have called out hockey writers for various silliness, but the Boston Herald's Ron Borges deserves a special section set aside for himself.


Borges suggests that the Bruins "Make the Penguins pay the right way".  His game plan? "Hit the Penguins legally every chance you get. Make a point of putting the wood to their best players, Crosby and Malkin."

The guy is a sheer hockey genius, and the Bruins should seriously consider bringing him in as a game strategy consultant!

The best part of this fine literary work is how Borges manages to call for revenge on the team that took out Marc Savard, yet in the process manages to alienate himself from his fellow media member and then essentially insult the Bruins!


"Forget all the phony media chest beating about mandatory retribution for Cooke’s cheap shot from the blind side (of course, knowing him) to the head of Marc Savard that probably put Savard out for the season. That kind of talk is for children or the kind of guys who talk the talk but would never walk the walk."

Yes, other media members are phonies and childish.  Borges suggestions:


"They can sign Manny Pacquiao to a one-night contract and let him take care of the situation for them. They can call my boyhood friend, Nickie “The Nap” Napoliano, who makes problems disappear for a living."...

"To fight Cooke would be, in a word, stupid - unless Pacquiao is handling the fisticuffs. With Nickie, there would be no fighting involved. More a case of “Anybody seen Matt?' "...

"Take Sidney Crosby down every chance they get. He, not Cooke, is the Penguins’ heart and soul. Make him bleed for the sins of his teammate. Take him into the boards. Knock him down every chance you get. Bounce a puck off his nose if you can. If you get a blind side shot at him, put your body through his chest."

Even being facetious, going the "bring in a boxer, or name dropping your mafioso pal" route is pathetic and a sterling example of "walking the walk"!  I'm embarrassed for him!

Take out Crosby!  There is a novel idea.  We are pretty sure that the concept is only legally fit for print if your newspaper starts with the word "Philadelphia."  The Inquirer and Daily News attorneys should be calling soon.

Yet, embarrassing himself wasn't enough.  He had to call out the Bruins players as well.


"Hit the Penguins legally every chance you get. Make a point of putting the wood to their best players, Crosby and Malkin. Forget the fighting unless they want to do it in the parking lot where everyone can get a little leverage because their skates will be on the locker room floor and not on their feet.
Now this is asking a lot, because the Bruins hit people about as often as Mother Teresa did. They may not be pacifists, but they might as well be. To them, a hit is something they hear on the radio. Punch is something you drink, not something you throw at these guys."

Right on Ron: Fight it out in the parking lot! That's not "phony" talk.  You walk the walk brother!  ...and don't stop there... call the Bruins a bunch of pansies if they don't do it!

He forgot one other thing.  He did not dress down David Booth for being a "phony fighting fool" for when he punched away at Mike Richards in his first game against the Flyers after Richards concussed him months before.

Those near pacifist Bruins are supposed to draw the blood of Crosby "for the sins of his teammate" Cooke.  To whom do we draw blood from at the Herald for the sins of Ron Borges and his asinine and juvenile discourse?
Posted by The Plumber at 1:14 PM