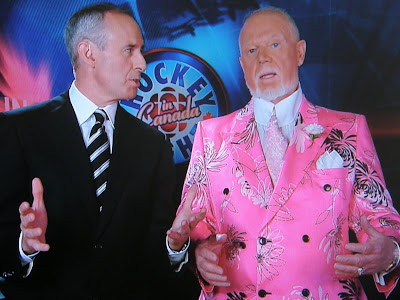 Don Cherry used his "Coach's Corner" segment on HNIC to tell us what an evil vile thing is Matt Cooke. Don Cherry calling someone out on a personal vendetta? Big surprise, we know.

(I know it's very seventh grade of me, but I smirk every time I see the "Hockey Night In Canada" acronym.  Canada and the U.S. can be so vastly different.)

A few observations:  Cherry says "it's unbelievable" that Cooke wasn't suspended. He then cited the rulebook regarding assessing what?... yes, a match penalty.  OK. Thanks Don?

Cherry uses video "evidence" of how cheap Cooke has been throughout his career.  (My personal fav is when he talks about Cooke going after Vinny Lecavalier's head and shows a clip of him, in what appears to be Cooke hitting him under the arm and shoulder.) Then the coach enlightens the audience of how tough he is by regailing a story of how he confronted Cooke last season.

Cherry also made reference of how this incident will make Cooke the "poster boy" of the critics of the NHL.  My vote for "poster boy of reasons to not like hockey" would be Cherry himself, but that is another story.

Cooke wasn't suspended because he did not use his elbow to hit Savard, and the shoulder hit, even to the head, is "legal".  For the one millionth time, Mike Richards was not suspended either for the same hit on David Booth.

Everywhere you click, one can read how and why the league can and will change the rule to protect players from these kinds of plays.  One can also find mountains of articles asking "what if... this happened to Crosby", etc...

Well, just today, we nearly found out how the NHL would react to an injury to Crosby, when Steve Downie, um... hog tied him in the first period.

As with many of these situations, it all is a matter of perspective.  On the Pittsburgh feed that you just watched, the Downie "slew foot" move on Crosby is a vile and despicable act of sheer evil.

Crosby was alright. During a first intermission interview on TSN in Tampa, he was asked about the hit.  His response was that it was a little scary, but those sorta plays "happen" in hockey.  What a whiner that guy is, eh Crosby haters?

Crosby didn't think it was a big deal, but will Pittsburgh/Crosby fans all over call for a suspension, or for Downie to be burned at the stake?  You bet they will.

On the other side of the spectrum.  What will happen to a superstar when he is guilty of the not-so-infrequent "cheap shot"?  Alex Ovechkin received his third game misconduct penalty of the season when he shoved Chicago's Brian Campbell into the boards today on NBC.

Ovechkin has had multiple knee-on-knee hits, often leaves his skates to hit opponents and is reckless and careless, ala Matt Cooke, would say his detractors.  Ovechkin may avoid being suspended thanks to a very fine line in the rulebook.

Like Cooke, if he is suspended, his fans (Pierre McGuire, etc...) will go nuts and cite the letter of the law.  If he isn't, expect Don Cherry to put together yet another "enlightening" piece of what a piece of "Eurotrash" Ovechkin is, and how he once confronted him about his gutless play!
Posted by The Plumber at 11:52 PM