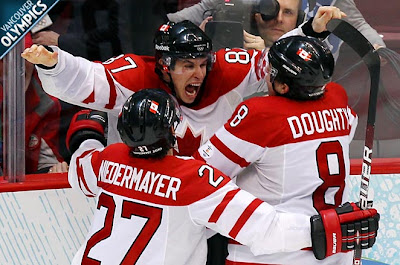 We all got what we hoped for: A dramatic, hard fought final game. 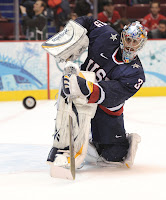 Ryan Miller, who had been brilliant all tournament long, expected a ton of rubber to be sent his way.  He saw shots from all angles, all situations and had another strong performance.  It was tough to see him go away with less than what he deserved.

Luongo also played as expected, stopping most of the shots that hit him and was good enough not to lose.  Hockey Plumber still says Canada's best money goalie, the last two seasons running, never suited up during the games.

Canada played a smothering team defense.  They challenged everything, at every point on the ice, and the Americans had to work their tails off for any opportunities... and work they did.  Down two-nil, the U.S. kept plugging away.  Throwing shots at net whenever possible and they were rewarded.

Then late, with Miller on the bench, they punched in a heart-stopping, game tying goal.

Canada had to regroup after three periods of hockey and come out for OT in a game that the entire nation must have felt that they had sewn up just minutes before.

Yet, Canada had a secret weapon... a slight edge in the form of the best player in the world.  As any hockey fan in Philadelphia will tell you, Gary Bettman conspired with the IOC and set the table for his Golden Boy Sid.  Crosby pushed the gold medal winner past Miller 7:40 into overtime.

NBC then shocked the world by staying with the hockey medal presentations all the way through... without switching to a higher profile curling match.  What a gift from the peacock!

(photo Crosby: Getty Images)
Posted by The Plumber at 7:18 PM