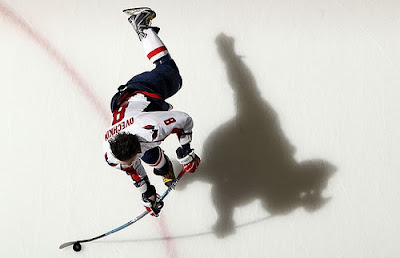 
The Capitals cast their shadow over the rest of the league.  The Kings climb, as do the Senators. Calgary and Boston keep slipping, while there are signs of life in Carolina!

1. (3) Washington Capitals
The Caps have won a staggering twelve in a row!  They are not just winning but dominating each contest. The scary part: Ovechkin doesn't need to score for Washington to put up offensive numbers.

2. (1) San Jose Sharks
The Sharks stay near the top. Patrick Marleau continues to stay with the league leaders in goals, while his high flying teammates support him on the scoreboard nightly. The Sharks sacrificed some depth on their blueline in the off-season and are starting to get concerned as they head toward the stretch.  Look for them to make a move soon to bolster their D.

3. (2) Chicago Blackhawks
The Blackhawks continue to impress.  They bring the same intensity against every opponent.  In some circles, questions still hang over their goal tending, but why? Niemi and Huet have been excellent all season long.

4. (11) Los Angeles Kings
Winners of eight straight, tying a club record, the Kings are smoking hot! Anze Kopitar has come back to life since Smyth returned to the lineup.  Doughty, Simmonds and the whole crew have really stepped up and L.A. is proving that they are a legit contender in the West.

5. (6) Phoenix Coyotes
It wasn't supposed to be like this.  Not this season.  Yet, the Coyotes keep rolling along.  Five wins in a row, despite losing Scottie Upshall.  Coach Dave Tippett should have his name engraved on the Jack Adams already.  Shane Doan has been Captain Extraordinaire.  Phoenix is not going away.

6. (9) Pittsburgh Penguins
Pittsburgh looks inspired again.  Crosby looks like he is after the Rocket Richard trophy for his collection. Malkin is back on track.  The Penguins want to win the division and it looks again like it may be within reach.

7. (8) Vancouver Canucks
Although he hasn't lit up the scoreboard, the Canucks have been white hot since the return of Pavol Demitra. They have hit a mini skid in February and are deadly at home. Vancouver looks like they will have to battle to the end with Colorado to keep that advantage in the post season.

8. (13) Ottawa Senators
Another streaking team, Ottawa has put together eleven in a row.  Vancouver thought they had the best team in Canada title sewn up, but the Sens have other plans.  Solid defense and great goal tending have pushed them to another level.


9. (4) Buffalo Sabres
Did we just mention great goal tending? Miller has been the standard of excellence in net this season, but the end of January and early February has been unkind to Miller and the Sabres. Buffalo is still in firm control of the division, which will guarantee them a top three seed, but the team will need to find itself again after the break.

10. (5) New Jersey Devils
The Devils have really struggled scoring goals lately.  Hopefully for them, the newly acquired sniper Kovalchuk  will be the cure for what Ilya's the offense.  (Sorry, couldn't resist)

11. (7) Colorado Avalanche
The Avs weren't supposed to be here either.  Even though they have suffered through a rough patch as of late, they will still be keeping things interesting by battling Vancouver to the finish.

12. (10) Nashville Predators
Patric Hornqvist is good! Who would have believed that Nashville would be ahead of Detroit and keeping them at bay?  The Preds keep finding ways to win and could be a real headache in round one.

13. (12) Detroit Red Wings
It has been an awful season by Red Wing standards.  It appears that they are close to getting healthy again.  Will the Mule be able to kick down the door to the playoffs? As we head to the stretch, we will see if this team has really lost it, or if injuries just steered them off course for a while.

14. (18) Anaheim Ducks
The Ducks are beginning to play the kind of hockey everyone believed they would all along.  The New Year gave them new life.  They unloaded an unhappy Giguere and are moving forward in a positive direction.

15. (25) Dallas Stars
Dallas has played a much more solid team game since mid January and are getting contributions from their leaders on each unit.  Alex Auld has done a decent job in replacing the soon to be move Turco. Financially troubled owner Tom Hicks is exploring a possible sale of the team. It's worked so far for the Coyotes situation...

16. (15) Calgary Flames
Trades or no trades, Calgary has struggled mightily, beating only bottom feeders Edmonton and Carolina since their January 9th win over the Canucks.  No more blaming Phaneuf and Jokinen... now what?


17. (20) Minnesota Wild
Guillaume Latendresse keeps showing them how it's done in the 'sota.  Latendresse will put up career number this season even if he has a massive letdown after the break... but not likely.  His acquisition shook the Wild out of their early season funk, and they keep climbing upward.

18. (17) Philadelphia Flyers
Dead in the water in December, the Flyers caught on to what new Coach Laviolette's system.  They have slowed a bit since, but are in the hunt again.

19. (26) Tampa Bay Lightning
Anther team that is rising and facing potential ownership change... what a formula! The Lightning are playing sound defensive hockey, but mysteriously struggle to score most nights.  Will the new owner actually deal Vinny???

20. (22) St. Louis Blues
Same ol' Blues.  Keep the score low.  They are just good enough to stay in the hunt, but not good enough to secure their place.  Aging forwards could be dealt at the deadline to bolster their younger core players for the future.

21. (23) Florida Panthers
David Booth is back from his head trauma courtesy of Mike Richards, but the streaky Panthers have lost another top flight forward in Nathan Horton thanks to a leg fracture.


22. (24) Montreal Canadiens
Les Habs have lost Cammalleri for six weeks.  "Backup" net minder Halak has been stellar and they will need him to be if Montreal has any hopes for getting to the post-season. Plekanic, who's great season has been one of the few bright spots for Montreal this year, becomes an UFA in July.  Will the Habs be able to re-sign him, or will he be dealt to a contender?

23. (21) Atlanta Thrashers
Thrasherland is reeling from the Kovalchuk trade.  They received a barely acceptable return for the franchise's best player.  Maybe they hope to re-ink Kovy after July 1, and they then would have received some free goodies fron New Jersey along the way.

24. (27) Columbus Blue Jackets
Also in the news this week for firing Coach Ken Hitchcock.  The Jackets have played slightly better lately.  Maybe a new voice in the locker room is what this young team needs.

25. (16) New York Rangers
The Rangers O checks out one night, the D the next.  Plagued by inconsistent play even King Henrik can't save this team from it's dismal season.  the Rangers have to be thrilled with the play and health of Marian Gaborik.  The team has plenty of young talent waiting in the wings... if only Sather had not taken up so much cap space with the Drurys and Reddens, etc...

26. (14) New York Islanders
Another streaky club, the Isles are on one of their "bad" streaks.  losers of six straight.  Putting blueliner Witt on waivers isn't gonna fix much.  No worries, inevitably a "good" streak is on the way.


27. (29) Carolina Hurricanes
Eric Staal was made Captain.  Since then both he and the team have ripped it up like a bunch of... uh... Hurricanes! February has tripped them up a bit, but they closed out January by winning four in a row!  Did they even win four in a month prior to the New Year? Well, they did win five in December!

28. (19) Boston Bruins
What is up with these Bruins? One win in their last ten games.  Injuries keep setting them back... but one win in ten? A looooong rest during the Olympic break might be just what the doctor ordered for Boston.

29. (28) Toronto Maple Leafs
New Year = New Team.  The Leafs sent more than a handful of players packing to land Dion Phaneuf and J.S. Giguere.  Their new faces had a fantastic start in a shutout win over New Jersey.  How long can the new guys keep it going?

30. (30) Edmonton Oilers
Two wins in February!  Don't get your hopes up Edmonton, the Oilers still stink.  Yet, if they can get anything out of their impending fire sale, and couple the return with a shiny, new #1 overall selection, hope will return for the 2010-11 season.  Woo Hoo!
Posted by The Plumber at 7:40 PM