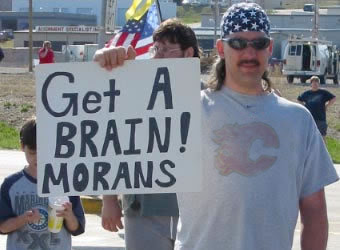 In a deal which was reported nearly 24 hours early, Calgary shipped Olli Jokinen and Brandon Prust to the Rangers in exchange for Chris Higgins and Ales Kotalik. The trade supposedly was held up because the Flames wanted to have Jokinen on hand for last night's game.

What?
If true, the strategy worked about as well as the Flames have played lately.  Jokinen and the rest of the Flames were ineffective, as the team lost for the tenth time in their last eleven games, getting shutout by visiting Philadelphia.
After this trade, it is evident that there is a plan in place in Calgary: Pray to still make the playoffs this season and then start over.

Jokinen wasn't working in Calgary, but they exchanged him for a malcontent in Kotalik, who essentially went AWOL in New York.  As a bonus, Kotalik has one more year at $3 million.  The Flames did acquired a hard working, "character guy" with decent hands in Higgins. Yet, he was having an off year with the Rangers and they had to package in Brandon Prust who was an energy guy/fighter/fan favorite, making it a wash. 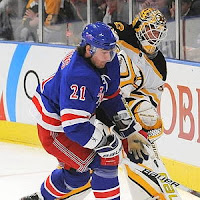 At the conclusion of the season Calgary will have 8 regular forwards and 5 blueliners under contract.  They will have to figure out what to do with forwards Rene Bourque, Dustin Boyd, Craig Conroy, Eric Nystrom, tough guy Eric McGrattan, and nearly all of their recently acquired players: Ian White, Chris Higgins, Matt Stajan and Jamal Mayers. 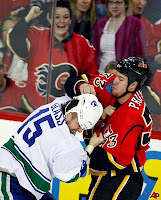 All of those guys are not coming back and the Flames run the risk of having, in retrospect, traded Dion Phaneuf, Olie Jokinen, Brandon Prust, Fredrik Sjostrom,  hulking prospect Keith Aulie for essentially  Ales Kotalik and Niklas Hagman.  White will become a RFA, so they likely will retain him but, come July, will their fans look back fondly on what the team got out of these deals?