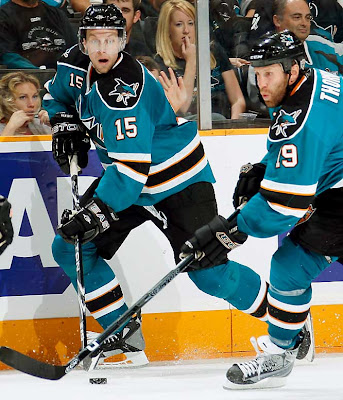 1. (2) San Jose Sharks
The Sharks have won three of their last four, losing only to St. Louis in a shoot out. Heatley continues to make San Jose glad they traded for him. The Fins climb to the top of the standings and the rankings.

2. (3) Pittsburgh Penguins
The Pens are getting healthier and have won three straight in dominating fashion. Crosby is absolutely on fire… even Mike Rupp has displayed a new found scoring touch nothing a hat trick on his sons birthday. “Thanks Dad!”

3. (6) Washington Capitals
Have won three in a row even with Ovie injured/suspended. Do they actually play better without him?

4. (5) Calgary Flames
Flames continue to follow Iginla’s lead and have won three of four. Like their captain, Calgary is scoring and beating teams up.

5. (7) New Jersey Devils
Aside from losing his showdown with Luongo, Brodeur has been shutting down opponents by standing up in net. Captain Langenbrunner has been supplying all the offense the Devils need lately.

6. (1) Chicago Blackhawks
After winning eight in a row the Hawks have lost three of four. Chicago signed three of their young guns (Toews, Kane and Keith) to extensions, but they fall this week in the rankings.

7. (9) Buffalo Sabres
The Sabres have won four in a row. Miller is All-World nearly every night. The U.S. Olympic team’s medal odds have to be getting better every week.

8. (10) Los Angeles Kings
The Kings are also working on a hot streak. Kopitar is still not putting up the numbers he did when Smyth was in the lineup, but Drew Doughty keeps the Kings rolling.

9. (8) Colorado Avalanche
Colorado is getting worn out by their up-tempo style? There has to be a reason why the Avs have lost seven of their last nine games. Anderson was hurt against Florida, but Budaj played well in a loss to Pittsburgh in his stead.

10. (4) Nashville Predators
The Preds cool off a bit as they have reverted to struggling again in the goal scoring department. Tough to win when you don’t put the puck in the net. They have picked it up a bit in their last two but split those contests.

11. (18) Phoenix Coyotes
Jovo is back and the Coyotes have won three straight. Nearly as big as a surprise as Colorado this season, Bryzgalov and Co. make is extremely difficult on opponents to score.

12. (11) Dallas Stars
Dallas has split their last four beating weaker teams and losing to the better clubs. The Stars stay where they are.

13. (13) Boston Bruins
The Bruins had an up and down week. They were held to one goal in their two losses and scored four times in both wins. Note to Tim Thomas: Don’t give up more than one goal.

14. (20) Vancouver Canucks
Luongo had trouble with the Sharks but beat up on a pair of Atlantic teams in New Jersey and Philly. The Canucks are healthy and getting consistent play in both ends and contributions from nearly everybody. Vancouver starts its climb.

15. (22) Atlanta Thrashers
Atlanta closed out November with four consecutive victories; notching a pair of shut outs along the way. Max Afinogenov LOVES playing with Kovalchuk, and looks poised to have a career year.

16. (12) Ottawa Senators
The Sens appeared to have righted the ship but have had their butts handed to them the last three games, giving up four, five and six goals respectively. Adding insult to injury, Sens fans had to watch Dany Heatley and the Sharks torture Ottawa in San Jose.

17. (16) Columbus Blue Jackets
The Jackets have been less than responsible defensively and have lost three of their last four including a 6-3 drubbing by Toronto at home. Has anyone seen Rick Nash lately?

18. (17) New York Islanders
The Isles beat the defending Champs one night and then got smoked by the Devils the next. Matt “the Destroyer” Moulson notched a hat trick in Atlanta and now has 14 for the season! That John Tavares kid is good too… but he’s no Matt Moulson!

19. (19) Detroit Red Wings
What the hell is going on with the Red Wings? They are ridiculously inconsistent. Shut out twice in a row and then score 8 in their next two games. It’s not too often that Detroit fans look to the Lions to help boost the sports fan morale… but, it’s an uncharacteristic year for these Wings.

20. (28) Minnesota Wild
The Wild’s newest additions Kobasew and Latendresse have sparked the team to four high flying wins in a row. They move up much because other teams have fallen so far.

23. (15) New York Rangers
The Rangers spent the week getting schooled by the Penguins twice. Marian Gaborik keeps doing his thing while the rest of the team wilts around him.

24. (24) Montreal Canadiens
Les Habs ebb and flow. They shut down one opponent and then get blown out the next night. Maybe it’s all the long 100 year pre-game ceremonies. Maybe they are just not very good.

25. (25) St. Louis Blues
Blues still can’t win when they give up more than two goals. St. Louis has been especially tough on the top tier teams, but just so-so against the rest of the pack.

26. (27) Edmonton Oilers
The Oilers lost Hemsky for the rest of the season. Does it matter? Another week of boom or bust.

27. (23) Florida Panthers
Goalies beware Florida blueliner Keith Ballard. In the midst of dropping five straight, Ballard hacked his own goaltender in the head while attempting to break his own stick on the goal post. The Panthers only win in their last seven came in a game when Ballard knocked Colorado (and former Panthers) goaltender Craig Anderson out of the game.

28. (26) Anaheim Ducks
After stringing together a few wins, the Ducks have stunk up December, losing the ageless Teemu Selanne for 4-6 weeks to injury.

29. (30) Toronto Maple Leafs
Brian Burke is a miracle worker again. The horrid Leafs have won five of six and are on the right track? Stay tuned.

30. (29) Carolina Hurricanes
Have lost five straight. Trade talks have started. Is it too soon for the Canes to forfeit the rest of the season? Injuries have hurt this club, but the team that made it all the way to the conference finals last season flat out stinks.
Posted by The Plumber at 2:53 PM