Ovechkin Another Kind of Dangerous 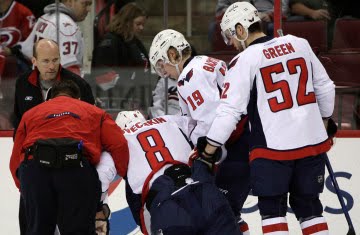 Alex the Gr8 needs a sit down.  The NHL is not keen on suspending it's stars; nor is the League (as has been mentioned here) keen on knee on knee shots.  However, Colin Campbell, the NHL's disciplinarian, is now facing a quandary... he shouldn't be, but he is.

Does Campbell send a message that no one is immune to being suspended for "reckless" play, and at the same time sit one of the League's most marketable players, or not?

He had no problem telling Georges Laraque that shots to the knee are unacceptable. Like many lesser stars, Laraque, and a few days later, Matt Cooke with his hit to the head against the Rangers forward Artem Anisimov were cited for past incidents and consequentially suspended.

Yet, Ovechkin has had knee on knee contact that resulted in injury to Sergei Gonchar in last years' playoffs, and a "slew foot" on Patrick Kaleta of the Buffalo Sabres this season may not be enough to cite Ovechkin for past crimes?  This should not be in question.

Ovie refused to address this incident last night after the game, but Carolina Coach Paul Maurice called the hit "dangerous." "I don't know how you want to define the play, but it's dangerous for both players."

Last night Caps coach Bruce Boudreau stated that he did not think the incident merited a suspension.  Why would he?  Yet today, even he offered, speaking of his star player to the media: "He's pretty reckless..."

It is for that very reason that Colin Campbell must suspend him.  Ovechkin, injured yet another player by carelessly extending his knee and colliding into an opponent's.  He injured himself as a bonus.  With all of his antics and over the top celebrations, Ovie's lack of "respect for the game" has been questioned by hockey purist, and attention whores like Don Cherry alike.

Yet, a lack of respect for his fellow players' well being, becoming a danger to himself, as well as others, should be questioned by the League and earn him some considerable time in the press box.
Posted by The Plumber at 1:36 PM