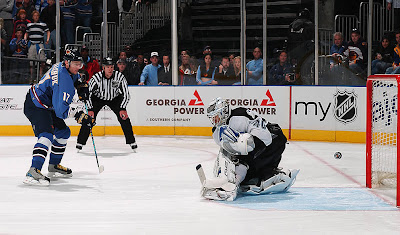 According to the AJC

"Our position is different than his position right now," Waddell told The Atlanta Journal-Constitution before Monday night's game with Montreal. "Their position is fixed years with money and we have a different side of that.

"That's what we have to work through. We've gotten through every thing else, now we have to make it through that."

Kovalchuk's agent, Jay Grossman, met with Waddell in Atlanta over the weekend. Waddell said he remained optimistic that a new deal would get done.

Kovlachuk was asked about the possibility of being sent to another team at the trade deadline should a new deal not be completed.

“It’s a business,” Kovalchuk said. “I think every player goes through that. It’s the first time for me. It’s [management’s] decision, but I like everything here. Like I’ve said a lot of times, I want to play with one team all my life, but you never know.”


Is this Waddell's public plea? He is utilizing the media to brace (ahem) Thrashers Nation for the possibility of losing their one and only superstar?  As Forbes recently divulged in their NHL fan rankings:


"The team had the worst attendance in the league last year, and second to worst TV ratings. "


Where do you go from there? If Atlanta loses their only hope to marketing this franchise, the answer is simple: They go away!
Posted by The Plumber at 1:55 PM