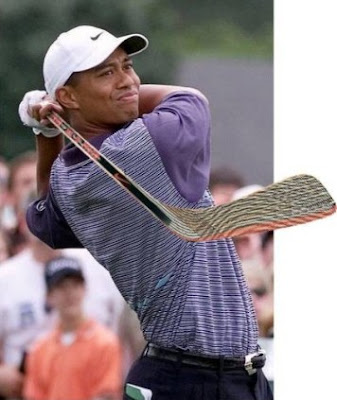 Back in June of 2008 at a news conference at Oakland Hills Country Club in Michigan, Tiger Woods was asked his thoughts about Game 5 of the Stanley Cup finals. He gave a bit of a mocking laugh, and then replied:

"I don't really care," he said with an impish smile. "It's all about the Dodgers. I don't think anyone really watches hockey anymore." [Freep.com]


"Oh, yeah, I've gotten a lot of grief over that," Woods said. "I love the sport. I love watching it, but I don't like watching it on TV. In person it's absolutely incredible, what they're able to do and what they can do. TV doesn't do justice to that. But then, a lot of sports are the same way.

"I said what I said and I was trying to be funny about it, but people didn't perceive it that way."


It wasn't perceived as funny because... it wasn't. Hockey fans could have told you that Tiger was a liar back then.  Who needs TMZ?

In November of 2009 the Orlando Sentinel reported "that neighbors found him lying shoeless and snoring on his Isleworth street after he plowed his SUV into a fire hydrant and tree."

Tiger has informed the world that he will take an indefinite leave of absence from golf and hopefully, for him, from the public eye as well.

Now fast forward to the 2010 NHL Playoffs. It is June, and now two years removed from Woods' heinous comments.  Billy Guerin is asked about his thoughts on Tiger Woods:

"Tiger? I don't really care," he says with an impish smile. "It's all about the Red Sox. I don't think anyone really watches golf anymore."** 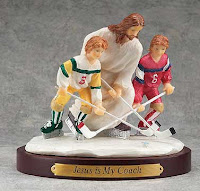 By the way, people will be watching hockey while Tiger is on sabbatical.  They will be watching hockey long after Tiger retires too.  Could there be a more classic example of misplaced importance on celebrity and "hero" worship than Mr. Woods?  The lesson learned (or not learned) here: When it is all said and done, only Jesus and Sidney Crosby are perfect.  Only they have the power to walk on water, save souls and such...

** Bill Guerin's quote is both futuristic and fictional. In no way should these disparaging remarks be attributed to Bill Guerin.  They are merely manifestations of the hockey plumber's ridiculously malicious and child-like mind.
Posted by The Plumber at 6:53 PM