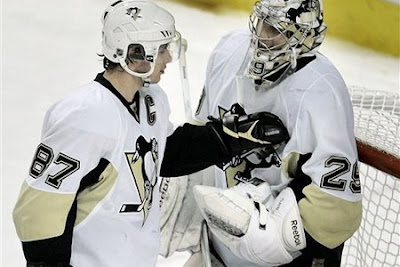 
The defending champs move up to number one. Nashville continues to move up as do the luckless Wings. The Sharks falter a bit while the Jackets, Canadiens, Flyers and Lightning plummet.

1. (3) Pittsburgh Penguins
The Penguins are healthy again. They have won four in a row and ten of their last thirteen. Marc-Andre Fluery is playing like he wants to start for Team Canada.

2. (2) Washington Capitals
The Caps are rolling. They have a few off nights, witnessed by a 3-6 drubbing by Toronto, but they consistently win with their attacking style and are getting offensive production from everyone.

3. (1) New Jersey Devils
The Devils fall from the top spot, in spite of their continued success. Why? Their even tempo style just doesn’t seem as impressive as the Caps and Pens? This was to be an “off year” for them…maybe we are not completely sold on New Jersey just yet.

4. (5) Chicago Blackhawks
After losing to Patrick Lalime (note NOT Ryan Miller) and the Sabres, Chicago goaltenders Huet and Niemi posted back-to-back shutouts. There were questions in net coming into the season. Those questions have been answered.

5. (10) Nashville Predators
Nashville has won three in a row and five of their last six, and doing it with offense! During their streak they have managed no less than five goals in any game. Steve Sullivan had a hat trick, and Nashville looks like it has a real player in Patric Hornqvist.

6. (6) Los Angeles Kings
The Kings surged last week to move into elite status, but have not sustained enough offense to keep their streak going losing twice this week in games in which they only managed one goal.

7. (4) San Jose Sharks
The Sharks had lost five straight until they beat Anaheim Thursday night. Do they have things together or is this just a little help from a bad team in the middle of a prolonged skid?

8. (11) Phoenix Coyotes
A note to all Phoenix area residents: Go see the Coyotes… this team is good! They just seem to find a way to win. It looks as if the NHL has found a new ownership group in Ice Edge. The new owners have a winner on their hands too.

9. (7) Calgary Flames
Kiprusoff has been his usual brilliant self, but Calgary’s offense has taken the month of December off thus far. A win at home against L.A. halted a three game skid, but Kipper had to hold the Kings to one goal to pull it out.

10. (12) Buffalo Sabres
The Sabres had won four in a row before getting shut out in Ottawa Wednesday night. Miller’s fantastic season continues. If he gets even a little offensive support, Buffalo wins.

11. (9) Colorado Avalanche
The Avs have also seen a bit of a power outage, as the team has struggled to score goals consistently. They have been held to one or fewer goals three times so far in December. They still have managed to win their share of games, but also have suffered through some bad games, like their 1-6 home loss to Washington on Tuesday.

12. (8) Boston Bruins
The Bruins cooled this week. They placed Lucic back on IR and lost back to back games to a struggling Islanders club then, even worse, to the hapless Flyers.

13. (13) Vancouver Canucks
Henrik Sedin remains on fire, but the Canucks have not been impressive as a whole. The win some good ones, but then give away games to lesser opponents like the Canes and Ducks.

14. (20) Detroit Red Wings
Like the old television Hee Haw refrain: “If it weren’t for bad luck, we’d have no luck at all…” The Wings won four in a row and then lost Henrik Zetterberg to a shoulder separation. Even when things go right for the Wings, that little black cloud seems to find them again.

15. (15) Minnesota Wild
The Wild are having a fine December. They are winning now with defense. Minnesota has limited opponents to one or fewer goals in four of their last five…all wins.

16. (17) Atlanta Thrashers
Winners of three of their last four, Atlanta counts on Captain Kovalchuk for late game heroics and he has not disappointed. He still has not signed an extension and the rumors of potential trade suitors have begun to surface. Will the Thrashers take care of this potential distraction during the holidays or risk waiting to see what happens?

17. (16) Ottawa Senators
The Sens are getting some quality goaltending lately and have won three of four with a pair of shutouts mixed in. How long will it last? The Devils, Wild, Bruins and Penguins are next on the list of opponents.

18. (14) Dallas Stars
Dallas has lost three straight and has given up way to many goals in that span. After a strong start, the inconsistencies of a year ago have returned.

19. (29) Florida Panthers
Vokoun is getting some goal support and the Panthers are back in the fight… for this week. When David Booth comes back will they continue to ride this offensive wave?

20. (21) Edmonton Oilers
Home is not so sweet for Edmonton. The Oilers had won five straight in December, all on the road; but have now lost their last two... at home.

21. (22) St. Louis Blues
The Blues honored Brett Hull on Tuesday with a ceremony and then followed up with a victory against his first team, Calgary. However, Brett’s daddy’s old club, the Blackhawks shut them out the next night.

22. (23) New York Islanders
The Isles defensive effort has been inconsistent lately. They played a tight contest in a win against the Bruins, and then got blown out by Florida in the next game. Their home and home with the Rangers was a similar story. Their offense is regularly out shooting opponents, but the chances they give up are deadly.

23. (27) Toronto Maple Leafs
With many teams looking for offense, the Leafs have found theirs. The problem is that they still help their opponents find goals as well. Nevertheless, this Toronto team, once left for dead, shows some real promise behind Phil Kessel and Co. up front.

24. (24) New York Rangers
The Rangers lost five in a row before their win against the hated Islanders. Coach Tortorella looked on the verge of a breakdown after number five in that streak. Again, Gaborik scores, but no one else can. Let’s see if the recent benching of Kotalik and Redden prove the cure for what ails them.

25. (18) Columbus Blue Jackets
The Jackets are losers of five straight and have had no offense to speak of. Rick Nash finally broke out of his goalless streak, but it has not been enough to win. This team could be in trouble.

26. (19) Montreal Canadiens
Montreal also has lost five straight and cannot seem to score. The Habs get Markov back on Saturday. They get a little slack because they have lost to some good teams, but very little.

27. (28) Anaheim Ducks
The Ducks have won two of three, but have now lost Lupul to go along with Selanne. Every time they sow some life, they take another hit.

28. (26) Philadelphia Flyers
The Flyers have won a few intermittent games, but that locker room is a disaster. The sad thing is that this team has the talent to win, but too many guys (see Hartnell and Carcillo) let their million dollar hands be overpowered by their ten cent heads.

29. (25) Tampa Bay Lightning
Tampa is falling apart. The Lightning have won only one game this month and have been shut out three times. How long can this continue before Tocchet gets the axe? We “bet” he does shortly after the New Year.

30. (29) Carolina Hurricanes
The Canes got goalie Cam Ward back from IR and ended their skid on the strength of a Tuomo Ruutu hat trick. The good news doesn’t stop there. If Tampa keeps it up they may raise Carolina up out of the basement in the division, the conference and the power rankings!
Posted by The Plumber at 4:41 PM