Two Long Seasons Too Much on Pens? 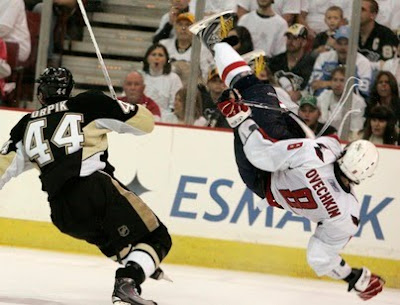 The injuries continue to pile up for the defending champion Penguins.  After suffering their third consecutive defeat at the hands of the Boston Bruins on Tuesday, Pittsburgh found out that they will be without hit machine Brooks Orpik for the next few weeks.

Orpik's injury only compounds the Penguins' woes. Already playing without top defensemen Sergei Gonchar and Kris Letang, they are missing three of their top four blueliners. Additionally, they are without the services of All-World center Evgeni Malkin, winger Tyler Kennedy, who was off to a hot start, and Stanley Cup hero forward Max Talbot.

The Penguins started the season out to prove that there would be no Cup hangover. They stormed out of the gates with team record 10 wins in October.  Yet, even the Champions are not immune to  the injury bug, and the wear and tear is beginning to show.

Gonchar, Malkin and Kennedy will be back on the ice soon which will help their ailing powerplay.  Having played so deep into the post-season two consecutive years may be catching up to them. It is interesting to see this young team suffer so many boo boos.  The only other team that can truly understand the toll that the prior two Cups runs have exacted on Pittsburgh is the Red Wings.  They have had injury concerns and have suffered an unusually slow start of their own.

Could it be that playing more than 100+ games per season is just too much to ask of a team?
Posted by The Plumber at 3:10 PM