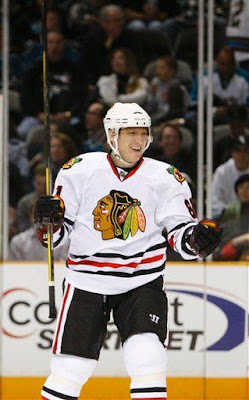 You can also see our rankings at: http://www.fadoo.ca/hockey.
The Blackhawks seize the top spot. The Predators rocket to a top ranking. The ruins and Sens move up and the Red Wings plummet. Last week's ranking in parenthesis.

1. (2) Chicago Blackhawks
The Hawks have won eight in a row going in to Friday’s game. They have not given up more than two goals in any game this past week, including a shutout in Vancouver. Hossa played his first game in a Chicago sweater and scored twice. A surging Chicago team just got 30 goals better.

3. (8) Pittsburgh Penguins
The Pens won three straight to surge past New Jersey for the division lead. Crosby looks absolutely inspired… when not scoring he is battling, back checking and leading by example.

4. (14) Nashville Predators
Nashville is officially white hot winning seven in a row. Shootout or regulation, home or on the road, they have done whatever is necessary to get the “W”.

5. (11) Calgary Flames
Have won two of three including a win at LA. Iginla continues his torrid streak moving the Flames past the Kings in the standings.

6. (4) Washington Capitals
The Caps lost three of their last four. An embarrassing loss to the Leafs doesn’t look good. Washington’s defense has not been the culprit. They haven’t scored more than two goals in any game this week, aside from the game in Ottawa, when they scored three… but gave up four.

7. (3) New Jersey Devils
Had lost three in a row until getting a win at home against Ottawa and fell behind Pittsburgh in the division.

8. (5) Colorado Avalanche
Colorado lost two of three and have lost six of their last eight. The Avs got Liles and Galairdi back from IR, maybe they can help stop the slide.

9. (6) Buffalo Sabres
The Sabres had lost four straight going in to Friday’s action. The team has struggled to score goals and have had a few uncharacteristically poor defensive lapses along the way. Miller will have to shut down their next opponent to right the ship.

LA has not scored many goals this week and lost ground to Calgary. Frolov has stepped up is game in Smyth’s absence but Kopitar and the rest of the team went awol this week.

11. (13) Dallas Stars
The Stars move back up the charts led by a fired up Stephane Robidas who filled in the goal void left by James Neal’s suspension.

12. (19) Ottawa Senators
The Sens have won five of their last six, handing losses to some top teams. Fisher continues to lead the way. Dany who?

13. (21) Boston Bruins
Lucic scored in his return to the lineup and the Bruins, winners of four straight going in to Friday have much more confidence and poise. When they get Savard back…watch out for the killer B’s!

14. (7) Philadelphia Flyers
The Flyers took it on the chin this week losing three straight before shutting down the Islanders. Philly has been giving up a ton of goals lately. Will this defensive lapse push Emery to implode?

15. (20) New York Rangers
Gaborik got wind of the other Marian’s return and cranked it up a notch. He is not getting enough credit for the season he is having. The Blueshirts are still inconsistent, but have the ability to bury their opponent on any given night.

16. (12) Columbus Blue Jackets
C’bus has lost four straight subjecting Mason to “sophomore slump” talk. The Jackets have not exactly lit up the scoreboard for him lately however.

17. (17) New York Islanders
The Isles continue to battle every night. Roloson defies Father Time… uh, time and time again. His 58 saves Monday night were proof enough that he is not slowing down.

18. (16) Phoenix Coyotes
Phoenix wants to keep the score low. The Coyotes season has been astonishing considering all of the turmoil surrounding this tight knit group.

20. (22) Vancouver Canucks
Henrik Sedin has been playing for his injured brother as well as himself and the team. The Canucks are getting healthy again and are making their move.

21. (15) Tampa Bay Lightning
Tampa lost to both Carolina and Toronto. They move down as a result. Has that happened to any other team this year? Stamkos and Malone are still the story. When they don’t get help, the Lightning don’t win.

22. (18) Atlanta Thrashers
The Thrashers lost three extremely tight games before shutting out Detroit this week. Atlanta never gives up, but need to stop digging holes for themselves early.

23. (23) Florida Panthers
The Panthers took care of Detroit and the Rangers, but then blew a late lead at home to Pittsburgh and were avenged by the same Rangers a few days later. Vokoun would do it all by himself if he could score regularly from the net.

24. (25) Montreal Canadiens
The Canadiens shipped problem child Latendresse to Minnesota and started playing better, losing only to the Stanley Cup Finalists. The Habs continue to push through despite recent injuries. They still are in dire need of getting Markov back.

25. (26) St. Louis Blues
Finally starting to score some goals. Mason and Conklin have been there for the Blues all season. If St. Louis is now ready to support them offensively they can do some damage in the West.

26. (28) Anaheim Ducks
The Duck have shown some life! Giguere won his first of the season. Anaheim is finally giving their fans hope that this season may not be lost after all.

27. (24) Edmonton Oilers
Edmonton’s scattered play keeps them struggling. A shutout one night, and then allowing 5 goals the next. They have lost Hemsky for the res of the season, so it will not get any easier.

28. (27) Minnesota Wild
The Wild have placed Martin Havlat on IR. If it were not for Carolina and Toronto having such horrible seasons, Minnesota would be the focus considering their fall. With so many changes both on and off the ice, it was expected for them to take time to adjust, but this is getting bad.

29. (29) Carolina Hurricanes
It’s a toss up as to what team is the worst, but the Canes have found their way to the basement missing Staal and Ward. What is Toronto’s excuse?

30. (30) Toronto Maple Leafs
The Leafs had won twice this week going into Friday’s action…and were still at the bottom of the league. This season can still be salvaged to some degree. The team is relatively healthy and has plenty of depth…will they do it?
Posted by The Plumber at 12:24 PM