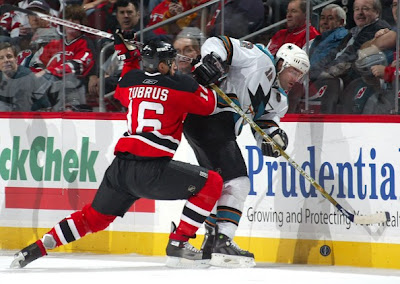 That's right, it's a regular feature! You can also see our rankings at: http://www.fadoo.ca/hockey.

The Blackhawks, Flyers, Blue Jackets and Predators climb, as the Penguins, Rangers and Leafs fall. Last week's ranking in parenthesis.

1. (2) San Jose Sharks
San Jose just keeps looking better overall each week. They are the regular season Sharks we are used to seeing. Free of the Captaincy, Patrick Marleau keeps filling the net and leading by example.


3. (1) New Jersey Devils
The Devils choked on the pages of the record books, losing in OT and regulation in their last two road games. However they are still 8-1-1 in their last ten.


4. (4) Washington Capitals
Alex the Gr8 is back, and scored in his return. The Caps continue to lead the league in goals scored despite Ovechkin’s absence.


6. (6) Buffalo Sabres
The Sabres snapped Philly’s win streak last weekend, but had an off game against the surging Panthers. Miller continues to impress regardless.

7. (10) Philadelphia Flyers
Everyone on the Flyers is contributing. After losing to Buffalo, Philadelphia had impressive back to back wins against New Jersey and LA.


8. (5) Pittsburgh Penguins
The injuries just keep on coming on the blueline. Gonchar in. McKee out. The Penguins have had injuries to all six defenseman. Mark Eaton had to play through it to avoid starting four AHL d-men last night.


9. (11) Detroit Red Wings
Zetterberg is back to being Zetterberg. The Wings have only lost twice in November.


10. (7) Los Angeles Kings
The Kings were hammered in Atlanta last Friday, but redeemed themselves with defensive gems in Tampa and Miami. Ryan Smyth was having a great season on Kopitar’s wing, but he will be out for a month. Time for Frolov to pick up the slack.


11. (8) Calgary Flames
Calgary slides after losing three of four; beating only lowly Toronto. Jarome Iginla continues scoring, but it hasn’t been quite enough.


12. (14) Columbus Blue Jackets
After getting whipped by Detroit last week, Columbus has won three in a row and did not give up more than two goals in any of those games. Filatov was sent back to Russia, but Nash, Huselius and Torres make sure that he will not be missed too much.

13. (12) Dallas Stars
Brad Richards and James Neal do all the heavy lifting, but the Stars keep trading one-goal wins and loses. Neal will sit the next two games for a hit from behind against Columbus.


14. (22) Nashville Predators
The Preds have won four in a row. Victories over top ranked New Jersey and San Jose make the streak even more worthy of a raised eyebrow.


15. (15) Tampa Bay Lightning
Up and down mini-West Coast swing keeps Tampa at fifteen. Strong performance at Phoenix followed by a let down in Anaheim. Stamkos and Malone have a chemistry that is giving opponents fits.


16. (16) Phoenix Coyotes
The ‘Yotes are 2-2 since last Friday. They win when giving up two goals or less; and lose when they don’t. Radim Vrbata is brick red hot.


17. (21) New York Islanders
The Islanders? Yes, the Islanders. Those youngsters can score and are 6-2-2 in their last ten. Maybe Garth Snow DOES KNOW what he is doing?


18. (17) Atlanta Thrashers
The Bruins halted a Thrasher’s four game win streak last night, but needed a shootout to do it. Kovalchuk’s long-term extension seems more and more likely as the season progresses. “Blueland” is a happy place as of late.


19. (20) Ottawa Senators
Ottawa is playing a more consistent game. Mr. Underwood, errrrr, Mike Fisher is doing his best to make Senator fans forget about Heatley. They pounced on Pittsburgh on the road last night, whipping them 6-2.


20. (13) New York Rangers
A slow week and much hotter teams push the Rangers down the list. Like the Coyotes, the Rangers can’t win when they give up more than two goals.


21. (18) Boston Bruins
The Bruins a treading water while waiting for Savard and Lucic to come back and save them. They have been giving up an abnormal amount of goals: 13 in their last three games in fact.


22. (19) Vancouver Canucks
Vancouver’s played only one game since last Friday. An 8-2 crushing of Colorado, but they had lost 3 straight before that, scoring only once in each loss.


23. (28) Florida Panthers
Florida is 6-3-1 in their last ten. Every win a different hero, but Vokoun has been a rock for them all season long.


24. (24) Edmonton Oilers
The Oilers had lost four in a row before beating the Avs on Wednesday; and have on two wins this month. Oilers fans never know what they are going to get on any given night.


25. (25) Montreal Canadiens
Montreal is now finding ways to lose in low scoring contests too. With the Caps (twice), Wings, Pens and Blue Jackets on the horizon, the Canadiens better start using the sticks with the goals in them soon.


26. (23) St. Louis Blues
Same story: St. Louis is getting the goaltending. Just not goals. The Blues have four games in November in which they scored only once.


27. (26) Minnesota Wild
The Wild have lost three in a row. Marian Gaborik seems like a much bigger loss than expected, no?


28. (27) Anaheim Ducks
Anaheim is having an awful season. Hiller and Giggy looked like Swiss cheese against Detroit and Pittsburgh. How long before heads begin to roll?


29. (30) Carolina Hurricanes
The Canes are AWESOME! Two wins this week, losing only in a shootout in Montreal. Carolina is on a one game win streak heading into Saturday’s contest versus Tampa!


30. (29) Toronto Maple Leafs
OK. Back to the dungeon Toronto. The Leafs have lost five straight including last nights loss to (of all teams) Carolina. You know it’s bad when Burke starts receiving SIGNED death threats!
Posted by The Plumber at 8:22 PM